In these volatile markets we scrutinize hedge fund filings to get a reading on which direction each stock might be going. The 800+ hedge funds and famous money managers tracked by Insider Monkey have already compiled and submitted their 13F filings for the fourth quarter, which unveil their equity positions as of December 31. We went through these filings, fixed typos and other more significant errors and identified the changes in hedge fund portfolios. Our extensive review of these public filings is finally over, so this article is set to reveal the smart money sentiment towards Hub Group Inc (NASDAQ:HUBG).

Hub Group Inc (NASDAQ:HUBG) was in 19 hedge funds’ portfolios at the end of December. HUBG has seen a decrease in hedge fund sentiment of late. There were 23 hedge funds in our database with HUBG holdings at the end of the previous quarter. Our calculations also showed that HUBG isn’t among the 30 most popular stocks among hedge funds (click for Q4 rankings and see the video at the end of this article for Q3 rankings).

To the average investor there are a large number of formulas stock traders can use to assess publicly traded companies. Two of the most under-the-radar formulas are hedge fund and insider trading activity. Our experts have shown that, historically, those who follow the best picks of the top hedge fund managers can trounce their index-focused peers by a very impressive margin (see the details here).

We leave no stone unturned when looking for the next great investment idea. For example, Federal Reserve and other Central Banks are tripping over each other to print more money. As a result, we believe gold stocks will outperform fixed income ETFs in the long-term. So we are checking out investment opportunities like this one. We read hedge fund investor letters and listen to stock pitches at hedge fund conferences. Our best call in 2020 was shorting the market when S&P 500 was trading at 3150 after realizing the coronavirus pandemic’s significance before most investors. Keeping this in mind we’re going to take a look at the recent hedge fund action surrounding Hub Group Inc (NASDAQ:HUBG).

At the end of the fourth quarter, a total of 19 of the hedge funds tracked by Insider Monkey were long this stock, a change of -17% from the third quarter of 2019. On the other hand, there were a total of 21 hedge funds with a bullish position in HUBG a year ago. With hedge funds’ sentiment swirling, there exists a select group of notable hedge fund managers who were adding to their stakes considerably (or already accumulated large positions). 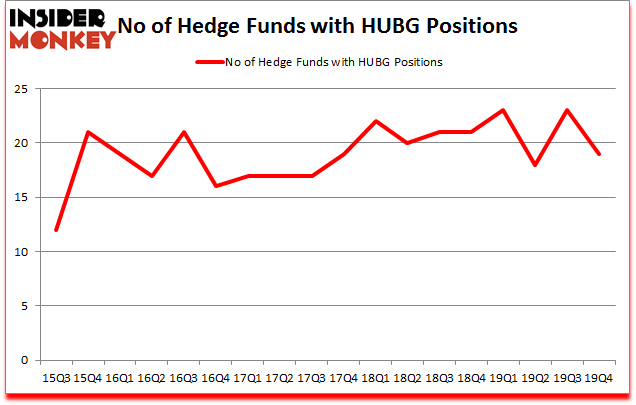 The largest stake in Hub Group Inc (NASDAQ:HUBG) was held by Diamond Hill Capital, which reported holding $142.1 million worth of stock at the end of September. It was followed by Fisher Asset Management with a $60.6 million position. Other investors bullish on the company included Scopus Asset Management, Schonfeld Strategic Advisors, and Cinctive Capital Management. In terms of the portfolio weights assigned to each position Scopus Asset Management allocated the biggest weight to Hub Group Inc (NASDAQ:HUBG), around 1.37% of its 13F portfolio. Diamond Hill Capital is also relatively very bullish on the stock, designating 0.71 percent of its 13F equity portfolio to HUBG.

Judging by the fact that Hub Group Inc (NASDAQ:HUBG) has witnessed declining sentiment from the smart money, logic holds that there was a specific group of money managers who were dropping their full holdings heading into Q4. It’s worth mentioning that Richard S. Meisenberg’s ACK Asset Management dropped the largest position of all the hedgies watched by Insider Monkey, valued at an estimated $5.2 million in stock. Paul Marshall and Ian Wace’s fund, Marshall Wace LLP, also sold off its stock, about $3.1 million worth. These moves are intriguing to say the least, as total hedge fund interest dropped by 4 funds heading into Q4.

As you can see these stocks had an average of 17 hedge funds with bullish positions and the average amount invested in these stocks was $127 million. That figure was $286 million in HUBG’s case. Fitbit Inc (NYSE:FIT) is the most popular stock in this table. On the other hand Matson, Inc. (NYSE:MATX) is the least popular one with only 10 bullish hedge fund positions. Hub Group Inc (NASDAQ:HUBG) is not the most popular stock in this group but hedge fund interest is still above average. Our calculations showed that top 20 most popular stocks among hedge funds returned 41.3% in 2019 and outperformed the S&P 500 ETF (SPY) by 10.1 percentage points. These stocks lost 13.0% in 2020 through April 6th but still beat the market by 4.2 percentage points. Hedge funds were also right about betting on HUBG as the stock returned -12.8% in 2020 (through April 6th) and outperformed the market. Hedge funds were rewarded for their relative bullishness.