Healthcare Trust Of America Inc (NYSE:HTA) was in 17 hedge funds’ portfolios at the end of the fourth quarter of 2018. HTA investors should be aware of an increase in enthusiasm from smart money in recent months. There were 16 hedge funds in our database with HTA positions at the end of the previous quarter. Our calculations also showed that HTA isn’t among the 30 most popular stocks among hedge funds.

At the end of the fourth quarter, a total of 17 of the hedge funds tracked by Insider Monkey were bullish on this stock, a change of 6% from the previous quarter. Below, you can check out the change in hedge fund sentiment towards HTA over the last 14 quarters. With the smart money’s sentiment swirling, there exists an “upper tier” of key hedge fund managers who were adding to their holdings substantially (or already accumulated large positions). 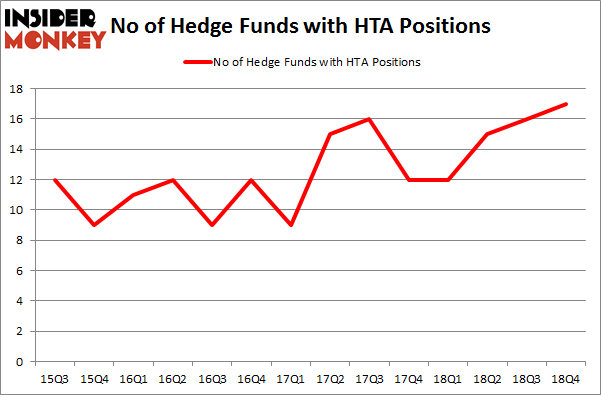 More specifically, AEW Capital Management was the largest shareholder of Healthcare Trust Of America Inc (NYSE:HTA), with a stake worth $80.9 million reported as of the end of September. Trailing AEW Capital Management was Renaissance Technologies, which amassed a stake valued at $62.7 million. Carlson Capital, Millennium Management, and Citadel Investment Group were also very fond of the stock, giving the stock large weights in their portfolios.

As one would reasonably expect, some big names have been driving this bullishness. Carlson Capital, managed by Clint Carlson, initiated the most outsized position in Healthcare Trust Of America Inc (NYSE:HTA). Carlson Capital had $52.5 million invested in the company at the end of the quarter. Sander Gerber’s Hudson Bay Capital Management also made a $23.1 million investment in the stock during the quarter. The other funds with brand new HTA positions are Minhua Zhang’s Weld Capital Management and Paul Marshall and Ian Wace’s Marshall Wace LLP.

As you can see these stocks had an average of 17 hedge funds with bullish positions and the average amount invested in these stocks was $294 million. That figure was $394 million in HTA’s case. Helmerich & Payne, Inc. (NYSE:HP) is the most popular stock in this table. On the other hand Phillips 66 Partners LP (NYSE:PSXP) is the least popular one with only 6 bullish hedge fund positions. Healthcare Trust Of America Inc (NYSE:HTA) is not the least popular stock in this group but hedge fund interest is still below average. This is a slightly negative signal and we’d rather spend our time researching stocks that hedge funds are piling on. Our calculations showed that top 15 most popular stocks among hedge funds returned 21.3% through April 8th and outperformed the S&P 500 ETF (SPY) by more than 5 percentage points. Unfortunately HTA wasn’t in this group. Hedge funds that bet on HTA were disappointed as the stock returned 13.5% and underperformed the market. If you are interested in investing in large cap stocks, you should check out the top 15 hedge fund stocks as 12 of these outperformed the market.