Hedge fund managers like David Einhorn, Dan Loeb, or Carl Icahn became billionaires through reaping large profits for their investors, which is why piggybacking their stock picks may provide us with significant returns as well. Many hedge funds, like Paul Singer’s Elliott Management, are pretty secretive, but we can still get some insights by analyzing their quarterly 13F filings. One of the most fertile grounds for large abnormal returns is hedge funds’ most popular small-cap picks, which are not so widely followed and often trade at a discount to their intrinsic value. In this article we will check out hedge fund activity in another small-cap stock: Grifols SA (NASDAQ:GRFS).

Grifols SA (NASDAQ:GRFS) has seen an increase in hedge fund interest lately. Our calculations also showed that GRFS isn’t among the 30 most popular stocks among hedge funds.

Today there are many metrics investors can use to evaluate stocks. A pair of the less utilized metrics are hedge fund and insider trading interest. We have shown that, historically, those who follow the top picks of the top hedge fund managers can outpace the S&P 500 by a solid margin (see the details here).

Heading into the fourth quarter of 2018, a total of 12 of the hedge funds tracked by Insider Monkey were long this stock, a change of 9% from the previous quarter. By comparison, 10 hedge funds held shares or bullish call options in GRFS heading into this year. With hedge funds’ positions undergoing their usual ebb and flow, there exists an “upper tier” of noteworthy hedge fund managers who were upping their holdings meaningfully (or already accumulated large positions). 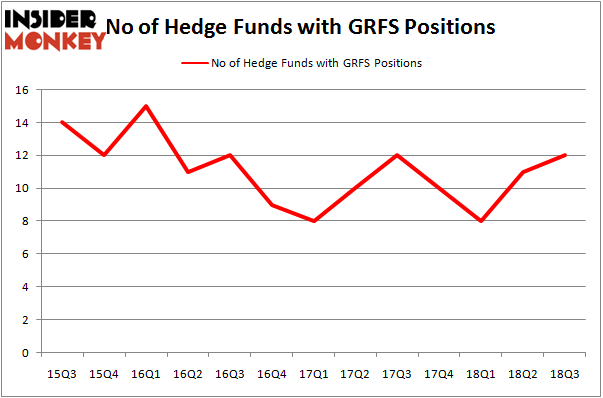 Among these funds, Arrowstreet Capital held the most valuable stake in Grifols SA (NASDAQ:GRFS), which was worth $66.8 million at the end of the third quarter. On the second spot was Farallon Capital which amassed $38.3 million worth of shares. Moreover, Millennium Management, GLG Partners, and Polar Capital were also bullish on Grifols SA (NASDAQ:GRFS), allocating a large percentage of their portfolios to this stock.

As industrywide interest jumped, key hedge funds were leading the bulls’ herd. Polar Capital, managed by Brian Ashford-Russell and Tim Woolley, established the largest position in Grifols SA (NASDAQ:GRFS). Polar Capital had $15 million invested in the company at the end of the quarter. Ian Simm’s Impax Asset Management also made a $0.6 million investment in the stock during the quarter. The only other fund with a new position in the stock is Ken Griffin’s Citadel Investment Group.

Let’s check out hedge fund activity in other stocks – not necessarily in the same industry as Grifols SA (NASDAQ:GRFS) but similarly valued. We will take a look at Spectra Energy Partners, LP (NYSE:SEP), McCormick & Company, Incorporated (NYSE:MKC), BioMarin Pharmaceutical Inc. (NASDAQ:BMRN), and Pembina Pipeline Corp (NYSE:PBA). All of these stocks’ market caps are similar to GRFS’s market cap.

As you can see these stocks had an average of 20.75 hedge funds with bullish positions and the average amount invested in these stocks was $649 million. That figure was $198 million in GRFS’s case. BioMarin Pharmaceutical Inc. (NASDAQ:BMRN) is the most popular stock in this table. On the other hand Spectra Energy Partners, LP (NYSE:SEP) is the least popular one with only 5 bullish hedge fund positions. Grifols SA (NASDAQ:GRFS) is not the least popular stock in this group but hedge fund interest is still below average. This is a slightly negative signal and we’d rather spend our time researching stocks that hedge funds are piling on. In this regard BMRN might be a better candidate to consider a long position.