Insider Monkey has processed numerous 13F filings of hedge funds and successful value investors to create an extensive database of hedge fund holdings. The 13F filings show the hedge funds’ and successful investors’ positions as of the end of the second quarter. You can find write-ups about an individual hedge fund’s trades on numerous financial news websites. However, in this article we will take a look at their collective moves and analyze what the smart money thinks of Gladstone Investment Corporation (NASDAQ:GAIN) based on that data.

Gladstone Investment Corporation (NASDAQ:GAIN) has experienced a decrease in activity from the world’s largest hedge funds lately. GAIN was in 4 hedge funds’ portfolios at the end of June. There were 7 hedge funds in our database with GAIN holdings at the end of the previous quarter. Our calculations also showed that GAIN isn’t among the 30 most popular stocks among hedge funds (see the video below).

Unlike other investors who track every movement of the 25 largest hedge funds, our long-short investment strategy relies on hedge fund buy/sell signals given by the 100 best performing hedge funds. We’re going to take a glance at the key hedge fund action encompassing Gladstone Investment Corporation (NASDAQ:GAIN).

At Q2’s end, a total of 4 of the hedge funds tracked by Insider Monkey were bullish on this stock, a change of -43% from the previous quarter. The graph below displays the number of hedge funds with bullish position in GAIN over the last 16 quarters. With the smart money’s capital changing hands, there exists a select group of key hedge fund managers who were adding to their stakes significantly (or already accumulated large positions). 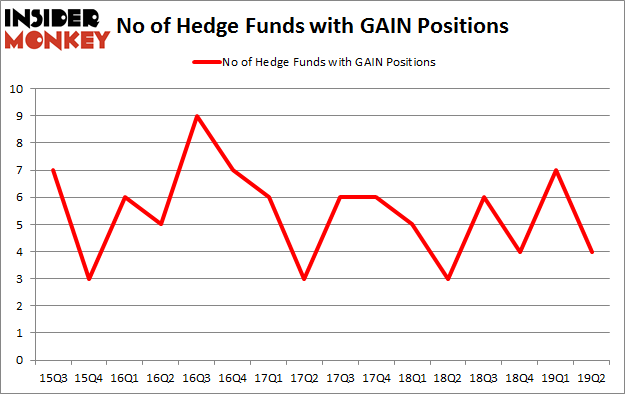 According to Insider Monkey’s hedge fund database, John Overdeck and David Siegel’s Two Sigma Advisors has the biggest position in Gladstone Investment Corporation (NASDAQ:GAIN), worth close to $0.9 million, amounting to less than 0.1%% of its total 13F portfolio. The second largest stake is held by Peter Rathjens, Bruce Clarke and John Campbell of Arrowstreet Capital, with a $0.5 million position; the fund has less than 0.1%% of its 13F portfolio invested in the stock. Other professional money managers that hold long positions encompass Ken Griffin’s Citadel Investment Group, D. E. Shaw’s D E Shaw and Israel Englander’s Millennium Management.

Because Gladstone Investment Corporation (NASDAQ:GAIN) has faced falling interest from the aggregate hedge fund industry, it’s safe to say that there is a sect of hedge funds who were dropping their entire stakes heading into Q3. At the top of the heap, Paul Marshall and Ian Wace’s Marshall Wace LLP sold off the biggest stake of the 750 funds tracked by Insider Monkey, comprising an estimated $0.8 million in stock. Eric Sprott’s fund, Sprott Asset Management, also dropped its stock, about $0.2 million worth. These moves are intriguing to say the least, as total hedge fund interest dropped by 3 funds heading into Q3.

As you can see these stocks had an average of 12.25 hedge funds with bullish positions and the average amount invested in these stocks was $56 million. That figure was $2 million in GAIN’s case. Assembly Biosciences Inc (NASDAQ:ASMB) is the most popular stock in this table. On the other hand Calyxt, Inc. (NASDAQ:CLXT) is the least popular one with only 3 bullish hedge fund positions. Gladstone Investment Corporation (NASDAQ:GAIN) is not the least popular stock in this group but hedge fund interest is still below average. Our calculations showed that top 20 most popular stocks among hedge funds returned 24.4% in 2019 through September 30th and outperformed the S&P 500 ETF (SPY) by 4 percentage points. A small number of hedge funds were also right about betting on GAIN as the stock returned 12.1% during the same time frame and outperformed the market by an even larger margin.