In these volatile markets we scrutinize hedge fund filings to get a reading on which direction each stock might be going. With this in mind let’s see whether Fox Factory Holding Corp (NASDAQ:FOXF) makes for a good investment at the moment. We analyze the sentiment of a select group of the very best investors in the world, who spend immense amounts of time and resources studying companies. They may not always be right (no one is), but data shows that their consensus long positions have historically outperformed the market when we adjust for known risk factors.

Fox Factory Holding Corp (NASDAQ:FOXF) was in 13 hedge funds’ portfolios at the end of December. FOXF has experienced a decrease in activity from the world’s largest hedge funds of late. There were 14 hedge funds in our database with FOXF positions at the end of the previous quarter. Our calculations also showed that FOXF isn’t among the 30 most popular stocks among hedge funds (click for Q4 rankings and see the video at the end of this article for Q3 rankings).

How have hedgies been trading Fox Factory Holding Corp (NASDAQ:FOXF)?

At the end of the fourth quarter, a total of 13 of the hedge funds tracked by Insider Monkey held long positions in this stock, a change of -7% from the previous quarter. The graph below displays the number of hedge funds with bullish position in FOXF over the last 18 quarters. So, let’s examine which hedge funds were among the top holders of the stock and which hedge funds were making big moves. 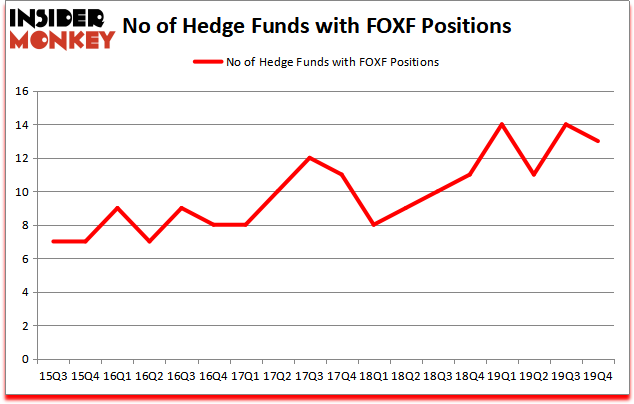 When looking at the institutional investors followed by Insider Monkey, Chuck Royce’s Royce & Associates has the most valuable position in Fox Factory Holding Corp (NASDAQ:FOXF), worth close to $4 million, comprising less than 0.1%% of its total 13F portfolio. The second most bullish fund manager is GLG Partners, managed by Noam Gottesman, which holds a $3 million position; the fund has less than 0.1%% of its 13F portfolio invested in the stock. Some other hedge funds and institutional investors that are bullish comprise Bryan Hinmon’s Motley Fool Asset Management, Ken Griffin’s Citadel Investment Group and Jay Genzer’s Thames Capital Management. In terms of the portfolio weights assigned to each position Thames Capital Management allocated the biggest weight to Fox Factory Holding Corp (NASDAQ:FOXF), around 0.6% of its 13F portfolio. Algert Coldiron Investors is also relatively very bullish on the stock, setting aside 0.24 percent of its 13F equity portfolio to FOXF.

Because Fox Factory Holding Corp (NASDAQ:FOXF) has experienced a decline in interest from the entirety of the hedge funds we track, it’s easy to see that there lies a certain “tier” of money managers that decided to sell off their positions entirely in the third quarter. Intriguingly, Renaissance Technologies dumped the biggest stake of the 750 funds monitored by Insider Monkey, comprising about $9.4 million in stock, and Paul Marshall and Ian Wace’s Marshall Wace LLP was right behind this move, as the fund cut about $1.9 million worth. These moves are important to note, as aggregate hedge fund interest fell by 1 funds in the third quarter.

As you can see these stocks had an average of 16.75 hedge funds with bullish positions and the average amount invested in these stocks was $224 million. That figure was $16 million in FOXF’s case. PROS Holdings, Inc. (NYSE:PRO) is the most popular stock in this table. On the other hand Franklin Electric Co. (NASDAQ:FELE) is the least popular one with only 14 bullish hedge fund positions. Compared to these stocks Fox Factory Holding Corp (NASDAQ:FOXF) is even less popular than FELE. Hedge funds dodged a bullet by taking a bearish stance towards FOXF. Our calculations showed that the top 20 most popular hedge fund stocks returned 41.3% in 2019 and outperformed the S&P 500 ETF (SPY) by 10.1 percentage points. These stocks lost 17.4% in 2020 through March 25th but managed to beat the market by 5.5 percentage points. Unfortunately FOXF wasn’t nearly as popular as these 20 stocks (hedge fund sentiment was very bearish); FOXF investors were disappointed as the stock returned -37.6% during the same time period and underperformed the market. If you are interested in investing in large cap stocks with huge upside potential, you should check out the top 20 most popular stocks among hedge funds as most of these stocks already outperformed the market so far in Q1.