Exelixis, Inc. (NASDAQ:EXEL) has experienced a decrease in hedge fund interest recently. EXEL was in 23 hedge funds’ portfolios at the end of the third quarter of 2018. There were 24 hedge funds in our database with EXEL holdings at the end of the previous quarter. Our calculations also showed that EXEL isn’t among the 30 most popular stocks among hedge funds.

To most investors, hedge funds are viewed as underperforming, old financial tools of yesteryear. While there are more than 8,000 funds trading at present, Our experts look at the aristocrats of this group, approximately 700 funds. These money managers orchestrate bulk of the hedge fund industry’s total asset base, and by keeping track of their unrivaled stock picks, Insider Monkey has brought to light many investment strategies that have historically outrun Mr. Market. Insider Monkey’s flagship hedge fund strategy exceeded the S&P 500 index by 6 percentage points per annum since its inception in May 2014 through early November 2018. We were able to generate large returns even by identifying short candidates. Our portfolio of short stocks lost 24% since February 2017 (through December 3rd) even though the market was up nearly 23% during the same period. We just shared a list of 11 short targets in our latest quarterly update.

At the end of the third quarter, a total of 23 of the hedge funds tracked by Insider Monkey were bullish on this stock, a change of -4% from one quarter earlier. On the other hand, there were a total of 28 hedge funds with a bullish position in EXEL at the beginning of this year. With hedge funds’ capital changing hands, there exists an “upper tier” of key hedge fund managers who were adding to their holdings substantially (or already accumulated large positions). 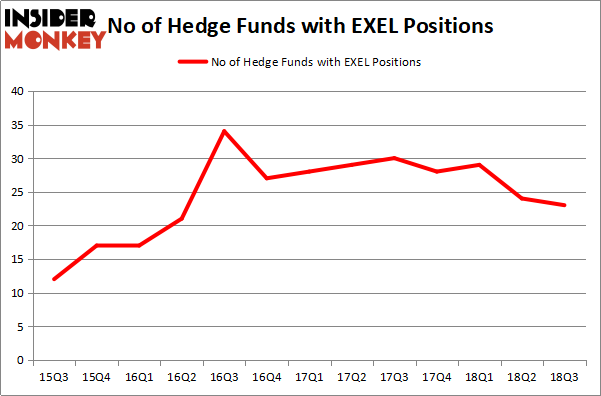 When looking at the institutional investors followed by Insider Monkey, Matrix Capital Management, managed by David Goel and Paul Ferri, holds the number one position in Exelixis, Inc. (NASDAQ:EXEL). Matrix Capital Management has a $177.2 million position in the stock, comprising 4.4% of its 13F portfolio. The second most bullish fund manager is AQR Capital Management, managed by Cliff Asness, which holds a $94.7 million position; the fund has 0.1% of its 13F portfolio invested in the stock. Some other hedge funds and institutional investors that are bullish consist of Jim Simons’s Renaissance Technologies, Mitchell Blutt’s Consonance Capital Management and Samuel Isaly’s OrbiMed Advisors.

Because Exelixis, Inc. (NASDAQ:EXEL) has witnessed declining sentiment from hedge fund managers, it’s safe to say that there exists a select few hedgies that elected to cut their positions entirely heading into Q3. At the top of the heap, John Overdeck and David Siegel’s Two Sigma Advisors said goodbye to the biggest position of all the hedgies followed by Insider Monkey, valued at about $23.3 million in stock. Julian Baker and Felix Baker’s fund, Baker Bros. Advisors, also said goodbye to its stock, about $11 million worth. These moves are interesting, as aggregate hedge fund interest was cut by 1 funds heading into Q3.

As you can see these stocks had an average of 17.75 hedge funds with bullish positions and the average amount invested in these stocks was $265 million. That figure was $679 million in EXEL’s case. Marriott Vacations Worldwide Corporation (NYSE:VAC) is the most popular stock in this table. On the other hand Centrais Elétricas Brasileiras S.A. – Eletrobras (NYSE:EBR) is the least popular one with only 4 bullish hedge fund positions. Exelixis, Inc. (NASDAQ:EXEL) is not the most popular stock in this group but hedge fund interest is still above average. This is a slightly positive signal but we’d rather spend our time researching stocks that hedge funds are piling on. In this regard VAC might be a better candidate to consider a long position.