East West Bancorp, Inc. (NASDAQ:EWBC) has experienced a decrease in enthusiasm from smart money of late. Our calculations also showed that EWBC isn’t among the 30 most popular stocks among hedge funds (see the video below).

Today there are numerous gauges shareholders have at their disposal to assess their stock investments. A duo of the most innovative gauges are hedge fund and insider trading indicators. We have shown that, historically, those who follow the best picks of the best money managers can outperform their index-focused peers by a significant amount (see the details here). 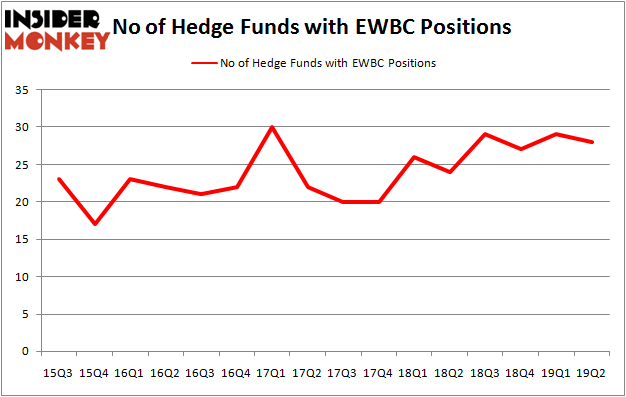 Unlike this former hedge fund manager who is convinced Dow will soar past 40000, our long-short investment strategy doesn’t rely on bull markets to deliver double digit returns. We only rely on hedge fund buy/sell signals. We’re going to take a look at the latest hedge fund action regarding East West Bancorp, Inc. (NASDAQ:EWBC).

How have hedgies been trading East West Bancorp, Inc. (NASDAQ:EWBC)?

The largest stake in East West Bancorp, Inc. (NASDAQ:EWBC) was held by Fisher Asset Management, which reported holding $91.3 million worth of stock at the end of March. It was followed by Two Sigma Advisors with a $54.2 million position. Other investors bullish on the company included D E Shaw, Citadel Investment Group, and Basswood Capital.

Seeing as East West Bancorp, Inc. (NASDAQ:EWBC) has witnessed bearish sentiment from the smart money, logic holds that there lies a certain “tier” of hedge funds that slashed their positions entirely by the end of the second quarter. Interestingly, Clint Carlson’s Carlson Capital dumped the biggest position of the 750 funds monitored by Insider Monkey, totaling an estimated $15.1 million in stock, and Ray Dalio’s Bridgewater Associates was right behind this move, as the fund dropped about $5.7 million worth. These moves are interesting, as total hedge fund interest fell by 1 funds by the end of the second quarter.

Let’s check out hedge fund activity in other stocks similar to East West Bancorp, Inc. (NASDAQ:EWBC). We will take a look at Assurant, Inc. (NYSE:AIZ), Dunkin Brands Group Inc (NASDAQ:DNKN), The Madison Square Garden Company (NYSE:MSG), and The Gap Inc. (NYSE:GPS). All of these stocks’ market caps are similar to EWBC’s market cap.

As you can see these stocks had an average of 30.75 hedge funds with bullish positions and the average amount invested in these stocks was $685 million. That figure was $379 million in EWBC’s case. The Madison Square Garden Company (NYSE:MSG) is the most popular stock in this table. On the other hand The Gap Inc. (NYSE:GPS) is the least popular one with only 21 bullish hedge fund positions. East West Bancorp, Inc. (NASDAQ:EWBC) is not the least popular stock in this group but hedge fund interest is still below average. This is a slightly negative signal and we’d rather spend our time researching stocks that hedge funds are piling on. Our calculations showed that top 20 most popular stocks among hedge funds returned 24.4% in 2019 through September 30th and outperformed the S&P 500 ETF (SPY) by 4 percentage points. Unfortunately EWBC wasn’t nearly as popular as these 20 stocks (hedge fund sentiment was quite bearish); EWBC investors were disappointed as the stock returned -4.8% during the third quarter and underperformed the market. If you are interested in investing in large cap stocks with huge upside potential, you should check out the top 20 most popular stocks among hedge funds as many of these stocks already outperformed the market so far in 2019.