It is already common knowledge that individual investors do not usually have the necessary resources and abilities to properly research an investment opportunity. As a result, most investors pick their illusory “winners” by making a superficial analysis and research that leads to poor performance on aggregate. Since stock returns aren’t usually symmetrically distributed and index returns are more affected by a few outlier stocks (i.e. the FAANG stocks dominating and driving S&P 500 Index’s returns in recent years), more than 50% of the constituents of the Standard and Poor’s 500 Index underperform the benchmark. Hence, if you randomly pick a stock, there is more than 50% chance that you’d fail to beat the market. At the same time, the 15 most favored S&P 500 stocks by the hedge funds monitored by Insider Monkey generated a return of 19.7% during the first 2.5 months of 2019 (vs. 13.1% gain for SPY), with 93% of these stocks outperforming the benchmark. Of course, hedge funds do make wrong bets on some occasions and these get disproportionately publicized on financial media, but piggybacking their moves can beat the broader market on average. That’s why we are going to go over recent hedge fund activity in Diageo plc (NYSE:DEO).

Diageo plc (NYSE:DEO) was in 14 hedge funds’ portfolios at the end of the fourth quarter of 2018. DEO investors should be aware of a decrease in hedge fund interest lately. There were 15 hedge funds in our database with DEO holdings at the end of the previous quarter. Our calculations also showed that DEO isn’t among the 30 most popular stocks among hedge funds.

What does the smart money think about Diageo plc (NYSE:DEO)? 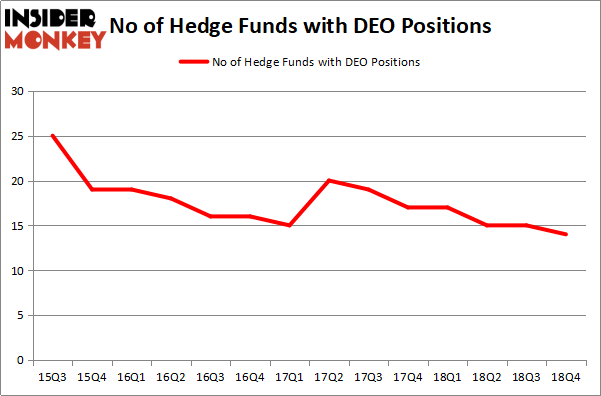 More specifically, Gardner Russo & Gardner was the largest shareholder of Diageo plc (NYSE:DEO), with a stake worth $269.8 million reported as of the end of September. Trailing Gardner Russo & Gardner was Markel Gayner Asset Management, which amassed a stake valued at $191.4 million. Renaissance Technologies, Arrowstreet Capital, and GAMCO Investors were also very fond of the stock, giving the stock large weights in their portfolios.

Seeing as Diageo plc (NYSE:DEO) has experienced falling interest from the entirety of the hedge funds we track, it’s easy to see that there exists a select few fund managers that slashed their positions entirely by the end of the third quarter. Intriguingly, Ilan Assouline’s Circle Road Advisors dropped the largest stake of the 700 funds tracked by Insider Monkey, valued at an estimated $3.2 million in stock, and Michael Platt and William Reeves’s BlueCrest Capital Mgmt. was right behind this move, as the fund sold off about $0.4 million worth. These transactions are important to note, as aggregate hedge fund interest was cut by 1 funds by the end of the third quarter.

As you can see these stocks had an average of 37 hedge funds with bullish positions and the average amount invested in these stocks was $2009 million. That figure was $891 million in DEO’s case. Bristol Myers Squibb Company (NYSE:BMY) is the most popular stock in this table. On the other hand China Petroleum & Chemical Corp (NYSE:SNP) is the least popular one with only 15 bullish hedge fund positions. Compared to these stocks Diageo plc (NYSE:DEO) is even less popular than SNP. Considering that hedge funds aren’t fond of this stock in relation to other companies analyzed in this article, it may be a good idea to analyze it in detail and understand why the smart money isn’t behind this stock. This isn’t necessarily bad news. Although it is possible that hedge funds may think the stock is overpriced and view the stock as a short candidate, they may not be very familiar with the bullish thesis. In either case more research is warranted.

Should You Buy The Boeing Company (BA)?
Monthly Newsletter Strategy
Download a free copy of our newsletter and see the details inside!
Hedge Fund Resource Center
Related News
Is Diageo plc (DEO) Going to Burn These Hedge Funds? 12 Best Selling Beer in Europe 11 Largest Beer Companies in the World in 2017 7 Largest Alcohol Distributors in the World 16 Luxury Alcohol Brands In The World 16 Best Selling Imported Beer Brands in US in 2017 Isinglass, Cochineal, GMOs: What’s in Your Beer? Ten of the Most Common Addictions 13 African Countries with the Largest White Population in 2018 6 Causes of Human Trafficking in Africa, India, and US
Billionaire Hedge Funds