We are still in an overall bull market and many stocks that smart money investors were piling into surged through October 17th. Among them, Facebook and Microsoft ranked among the top 3 picks and these stocks gained 45% and 39% respectively. Hedge funds’ top 3 stock picks returned 34.4% this year and beat the S&P 500 ETFs by 13 percentage points. Investing in index funds guarantees you average returns, not superior returns. We are looking to generate superior returns for our readers. That’s why we believe it isn’t a waste of time to check out hedge fund sentiment before you invest in a stock like Daktronics, Inc. (NASDAQ:DAKT).

Is Daktronics, Inc. (NASDAQ:DAKT) the right pick for your portfolio? The smart money is becoming less confident. The number of bullish hedge fund positions retreated by 1 in recent months. Our calculations also showed that DAKT isn’t among the 30 most popular stocks among hedge funds (see the video below).

In addition to following the biggest hedge funds for investment ideas, we also share stock pitches from conferences, investor letters and other sources  like this one where the fund manager is talking about two under the radar 1000% return potential stocks: first one in internet infrastructure and the second in the heart of advertising market. We use hedge fund buy/sell signals to determine whether to conduct in-depth analysis of these stock ideas which take days. We’re going to take a glance at the latest hedge fund action surrounding Daktronics, Inc. (NASDAQ:DAKT).

Heading into the third quarter of 2019, a total of 9 of the hedge funds tracked by Insider Monkey were long this stock, a change of -10% from the first quarter of 2019. Below, you can check out the change in hedge fund sentiment towards DAKT over the last 16 quarters. With the smart money’s capital changing hands, there exists an “upper tier” of notable hedge fund managers who were upping their stakes considerably (or already accumulated large positions). 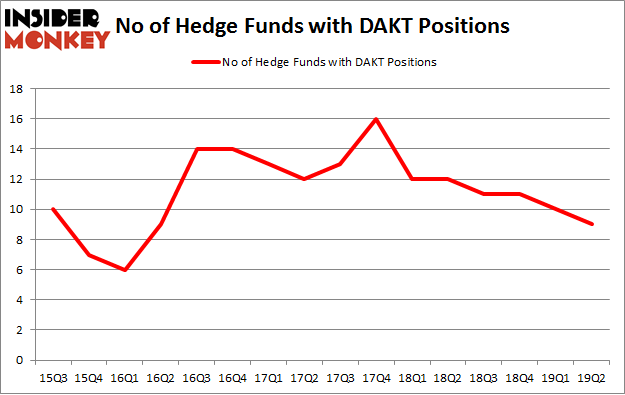 Of the funds tracked by Insider Monkey, Renaissance Technologies holds the biggest position in Daktronics, Inc. (NASDAQ:DAKT). Renaissance Technologies has a $7 million position in the stock, comprising less than 0.1%% of its 13F portfolio. The second largest stake is held by D E Shaw, managed by D. E. Shaw, which holds a $2.9 million position; less than 0.1%% of its 13F portfolio is allocated to the company. Some other peers that hold long positions consist of Peter Rathjens, Bruce Clarke and John Campbell’s Arrowstreet Capital, Ken Griffin’s Citadel Investment Group and John Overdeck and David Siegel’s Two Sigma Advisors.

Due to the fact that Daktronics, Inc. (NASDAQ:DAKT) has witnessed bearish sentiment from hedge fund managers, logic holds that there were a few money managers who sold off their positions entirely heading into Q3. At the top of the heap, Noam Gottesman’s GLG Partners dumped the biggest position of the “upper crust” of funds tracked by Insider Monkey, worth about $0.2 million in stock, and Peter Muller’s PDT Partners was right behind this move, as the fund cut about $0.1 million worth. These bearish behaviors are important to note, as total hedge fund interest was cut by 1 funds heading into Q3.

As you can see these stocks had an average of 7.75 hedge funds with bullish positions and the average amount invested in these stocks was $47 million. That figure was $16 million in DAKT’s case. SunOpta, Inc. (NASDAQ:STKL) is the most popular stock in this table. On the other hand Cellular Biomedicine Group, Inc. (NASDAQ:CBMG) is the least popular one with only 1 bullish hedge fund positions. Daktronics, Inc. (NASDAQ:DAKT) is not the most popular stock in this group but hedge fund interest is still above average. Our calculations showed that top 20 most popular stocks among hedge funds returned 24.4% in 2019 through September 30th and outperformed the S&P 500 ETF (SPY) by 4 percentage points. Hedge funds were also right about betting on DAKT as the stock returned 20.5% during the third quarter and outperformed the market. Hedge funds were rewarded for their relative bullishness.