Hedge fund managers like David Einhorn, Dan Loeb, or Carl Icahn became billionaires through reaping large profits for their investors, which is why piggybacking their stock picks may provide us with significant returns as well. Many hedge funds, like Paul Singer’s Elliott Management, are pretty secretive, but we can still get some insights by analyzing their quarterly 13F filings. One of the most fertile grounds for large abnormal returns is hedge funds’ most popular small-cap picks, which are not so widely followed and often trade at a discount to their intrinsic value. In this article we will check out hedge fund activity in another small-cap stock: CyrusOne Inc (NASDAQ:CONE).

CyrusOne Inc (NASDAQ:CONE) was in 24 hedge funds’ portfolios at the end of the third quarter of 2018. CONE shareholders have witnessed an increase in hedge fund sentiment in recent months. There were 19 hedge funds in our database with CONE positions at the end of the previous quarter. Our calculations also showed that CONE isn’t among the 30 most popular stocks among hedge funds.

In the 21st century investor’s toolkit there are many signals stock market investors use to evaluate publicly traded companies. Two of the most under-the-radar signals are hedge fund and insider trading moves. Our experts have shown that, historically, those who follow the best picks of the top investment managers can outclass the broader indices by a very impressive margin (see the details here).

What have hedge funds been doing with CyrusOne Inc (NASDAQ:CONE)?

At Q3’s end, a total of 24 of the hedge funds tracked by Insider Monkey were long this stock, a change of 26% from one quarter earlier. On the other hand, there were a total of 24 hedge funds with a bullish position in CONE at the beginning of this year. With hedge funds’ positions undergoing their usual ebb and flow, there exists a select group of key hedge fund managers who were boosting their holdings meaningfully (or already accumulated large positions). 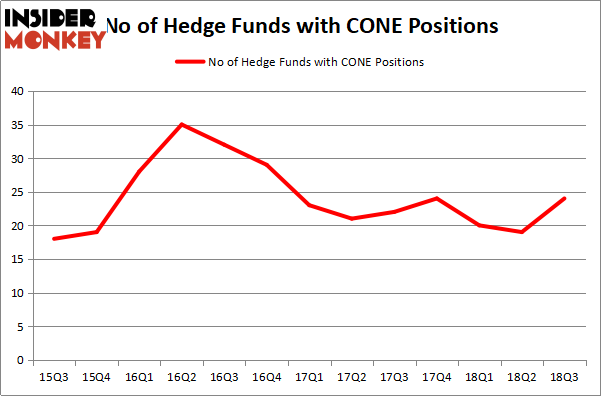 According to publicly available hedge fund and institutional investor holdings data compiled by Insider Monkey, Citadel Investment Group, managed by Ken Griffin, holds the biggest position in CyrusOne Inc (NASDAQ:CONE). Citadel Investment Group has a $63.4 million position in the stock, comprising less than 0.1%% of its 13F portfolio. Coming in second is AEW Capital Management, managed by Jeffrey Furber, which holds a $56.6 million position; the fund has 1.6% of its 13F portfolio invested in the stock. Other members of the smart money with similar optimism encompass Ken Fisher’s Fisher Asset Management, Richard Driehaus’s Driehaus Capital and Frederick DiSanto’s Ancora Advisors.

As one would reasonably expect, key money managers have been driving this bullishness. HBK Investments, managed by David Costen Haley, created the biggest position in CyrusOne Inc (NASDAQ:CONE). HBK Investments had $2.5 million invested in the company at the end of the quarter. David Rodriguez-Fraile’s BlueMar Capital Management also initiated a $2.2 million position during the quarter. The following funds were also among the new CONE investors: Matthew Halbower’s Pentwater Capital Management, Alec Litowitz and Ross Laser’s Magnetar Capital, and James Dondero’s Highland Capital Management.

Let’s now take a look at hedge fund activity in other stocks – not necessarily in the same industry as CyrusOne Inc (NASDAQ:CONE) but similarly valued. These stocks are Phillips 66 Partners LP (NYSE:PSXP), Polaris Industries Inc. (NYSE:PII), Hill-Rom Holdings, Inc. (NYSE:HRC), and Insulet Corporation (NASDAQ:PODD). All of these stocks’ market caps are similar to CONE’s market cap.

As you can see these stocks had an average of 16.75 hedge funds with bullish positions and the average amount invested in these stocks was $311 million. That figure was $225 million in CONE’s case. Hill-Rom Holdings, Inc. (NYSE:HRC) is the most popular stock in this table. On the other hand Phillips 66 Partners LP (NYSE:PSXP) is the least popular one with only 4 bullish hedge fund positions. CyrusOne Inc (NASDAQ:CONE) is not the most popular stock in this group but hedge fund interest is still above average. This is a slightly positive signal but we’d rather spend our time researching stocks that hedge funds are piling on. In this regard HRC might be a better candidate to consider a long position.