We at Insider Monkey have gone over 700 13F filings that hedge funds and prominent investors are required to file by the SEC. The 13F filings show the funds’ and investors’ portfolio positions as of September 30th. In this article we look at what those investors think of Costco Wholesale Corporation (NASDAQ:COST).

Is Costco Wholesale Corporation (NASDAQ:COST) a healthy stock for your portfolio? Investors who are in the know are becoming less confident. The number of bullish hedge fund bets decreased by 1 in recent months. Our calculations also showed that COST isn’t among the 30 most popular stocks among hedge funds.

At Q3’s end, a total of 39 of the hedge funds tracked by Insider Monkey held long positions in this stock, a change of -3% from the previous quarter. By comparison, 42 hedge funds held shares or bullish call options in COST heading into this year. With hedgies’ positions undergoing their usual ebb and flow, there exists an “upper tier” of notable hedge fund managers who were boosting their stakes meaningfully (or already accumulated large positions). 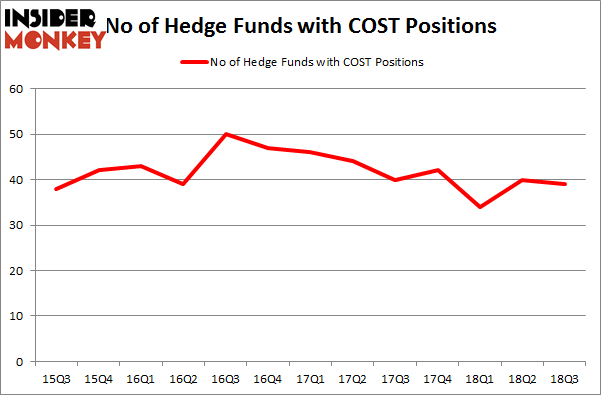 The largest stake in Costco Wholesale Corporation (NASDAQ:COST) was held by Berkshire Hathaway, which reported holding $1017.8 million worth of stock at the end of September. It was followed by Fisher Asset Management with a $629.6 million position. Other investors bullish on the company included Arrowstreet Capital, Citadel Investment Group, and Adage Capital Management.

Due to the fact that Costco Wholesale Corporation (NASDAQ:COST) has experienced bearish sentiment from the smart money, logic holds that there exists a select few fund managers who sold off their full holdings in the third quarter. Intriguingly, Alexander Mitchell’s Scopus Asset Management dropped the largest position of the 700 funds monitored by Insider Monkey, worth an estimated $62.7 million in stock, and Paul Marshall and Ian Wace’s Marshall Wace LLP was right behind this move, as the fund sold off about $52.3 million worth. These moves are intriguing to say the least, as aggregate hedge fund interest was cut by 1 funds in the third quarter.

As you can see these stocks had an average of 38.5 hedge funds with bullish positions and the average amount invested in these stocks was $2.82 billion. That figure was $2.83 billion in COST’s case. Broadcom Inc (NASDAQ:AVGO) is the most popular stock in this table. On the other hand AstraZeneca plc (NYSE:AZN) is the least popular one with only 26 bullish hedge fund positions. Costco Wholesale Corporation (NASDAQ:COST) is not the most popular stock in this group but hedge fund interest is still above average. This is a slightly positive signal but we’d rather spend our time researching stocks that hedge funds are piling on. In this regard AVGO might be a better candidate to consider a long position.