Is Companhia de Saneamento Basico do Estado de Sao Paulo – SABESP (NYSE:SBS) the right pick for your portfolio? Investors who are in the know are getting less optimistic. The number of long hedge fund positions retreated by 4 in recent months. Our calculations also showed that SBS isn’t among the 30 most popular stocks among hedge funds (see the video below). SBS was in 12 hedge funds’ portfolios at the end of the second quarter of 2019. There were 16 hedge funds in our database with SBS positions at the end of the previous quarter. 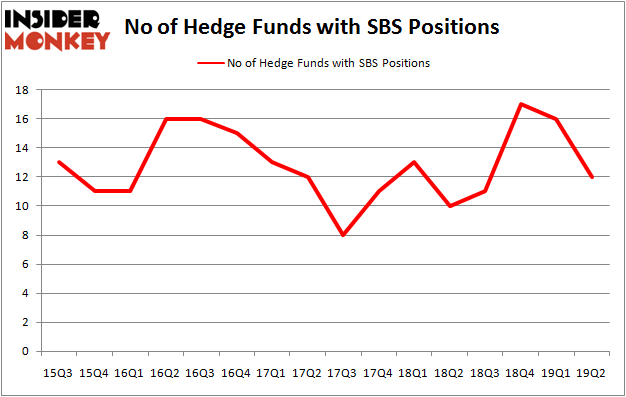 More specifically, AQR Capital Management was the largest shareholder of Companhia de Saneamento Basico do Estado de Sao Paulo – SABESP (NYSE:SBS), with a stake worth $168.9 million reported as of the end of March. Trailing AQR Capital Management was Renaissance Technologies, which amassed a stake valued at $89.9 million. Impax Asset Management, Arrowstreet Capital, and GLG Partners were also very fond of the stock, giving the stock large weights in their portfolios.

Because Companhia de Saneamento Basico do Estado de Sao Paulo – SABESP (NYSE:SBS) has experienced a decline in interest from the smart money, we can see that there is a sect of funds who were dropping their full holdings by the end of the second quarter. At the top of the heap, D. E. Shaw’s D E Shaw cut the largest investment of the “upper crust” of funds followed by Insider Monkey, comprising about $2.3 million in stock. Ken Griffin’s fund, Citadel Investment Group, also sold off its stock, about $0.6 million worth. These moves are intriguing to say the least, as aggregate hedge fund interest was cut by 4 funds by the end of the second quarter.

As you can see these stocks had an average of 25.5 hedge funds with bullish positions and the average amount invested in these stocks was $664 million. That figure was $452 million in SBS’s case. StoneCo Ltd. (NASDAQ:STNE) is the most popular stock in this table. On the other hand Graco Inc. (NYSE:GGG) is the least popular one with only 24 bullish hedge fund positions. Compared to these stocks Companhia de Saneamento Basico do Estado de Sao Paulo – SABESP (NYSE:SBS) is even less popular than GGG. Hedge funds dodged a bullet by taking a bearish stance towards SBS. Our calculations showed that the top 20 most popular hedge fund stocks returned 24.4% in 2019 through September 30th and outperformed the S&P 500 ETF (SPY) by 4 percentage points. Unfortunately SBS wasn’t nearly as popular as these 20 stocks (hedge fund sentiment was very bearish); SBS investors were disappointed as the stock returned -2.4% during the third quarter and underperformed the market. If you are interested in investing in large cap stocks with huge upside potential, you should check out the top 20 most popular stocks among hedge funds as many of these stocks already outperformed the market so far in 2019.