The elite funds run by legendary investors such as David Tepper and Dan Loeb make hundreds of millions of dollars for themselves and their investors by spending enormous resources doing research on small cap stocks that big investment banks don’t follow. Because of their pay structures, they have strong incentives to do the research necessary to beat the market. That’s why we pay close attention to what they think in small cap stocks. In this article, we take a closer look at Burlington Stores Inc (NYSE:BURL) from the perspective of those elite funds.

Hedge fund interest in Burlington Stores Inc (NYSE:BURL) shares was flat at the end of last quarter. This is usually a negative indicator. At the end of this article we will also compare BURL to other stocks including Domino’s Pizza, Inc. (NYSE:DPZ), The AES Corporation (NYSE:AES), and TechnipFMC plc (NYSE:FTI) to get a better sense of its popularity. Our calculations also showed that BURL isn’t among the 30 most popular stocks among hedge funds (view the video below).

Unlike some fund managers who are betting on Dow reaching 40000 in a year, our long-short investment strategy doesn’t rely on bull markets to deliver double digit returns. We only rely on hedge fund buy/sell signals. We’re going to analyze the new hedge fund action encompassing Burlington Stores Inc (NYSE:BURL). 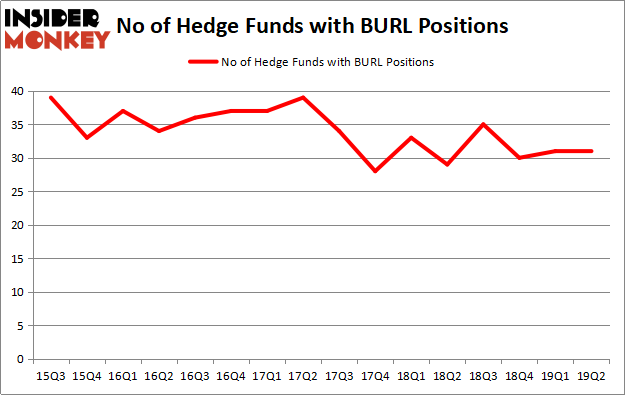 Among these funds, Adage Capital Management held the most valuable stake in Burlington Stores Inc (NYSE:BURL), which was worth $245.9 million at the end of the second quarter. On the second spot was Citadel Investment Group which amassed $231.1 million worth of shares. Moreover, Steadfast Capital Management, Samlyn Capital, and Third Point were also bullish on Burlington Stores Inc (NYSE:BURL), allocating a large percentage of their portfolios to this stock.

Seeing as Burlington Stores Inc (NYSE:BURL) has faced falling interest from the smart money, logic holds that there is a sect of fund managers that decided to sell off their full holdings in the second quarter. It’s worth mentioning that Peter Rathjens, Bruce Clarke and John Campbell’s Arrowstreet Capital dropped the biggest investment of the 750 funds tracked by Insider Monkey, worth an estimated $59.8 million in stock. Aaron Cowen’s fund, Suvretta Capital Management, also dumped its stock, about $59.8 million worth. These moves are interesting, as total hedge fund interest stayed the same (this is a bearish signal in our experience).

As you can see these stocks had an average of 27 hedge funds with bullish positions and the average amount invested in these stocks was $864 million. That figure was $1537 million in BURL’s case. Fidelity National Financial Inc (NYSE:FNF) is the most popular stock in this table. On the other hand TechnipFMC plc (NYSE:FTI) is the least popular one with only 25 bullish hedge fund positions. Compared to these stocks Burlington Stores Inc (NYSE:BURL) is more popular among hedge funds. Our calculations showed that top 20 most popular stocks among hedge funds returned 24.4% in 2019 through September 30th and outperformed the S&P 500 ETF (SPY) by 4 percentage points. Hedge funds were also right about betting on BURL as the stock returned 17.4% during Q3 and outperformed the market by an even larger margin. Hedge funds were clearly right about piling into this stock relative to other stocks with similar market capitalizations.