Is BanColombia S.A. (NYSE:CIB) an excellent investment today? Money managers are becoming less hopeful. The number of bullish hedge fund bets shrunk by 1 in recent months. Our calculations also showed that CIB isn’t among the 30 most popular stocks among hedge funds.

At the moment there are dozens of tools investors employ to assess publicly traded companies. Some of the most under-the-radar tools are hedge fund and insider trading indicators. Our experts have shown that, historically, those who follow the best picks of the top hedge fund managers can outperform the S&P 500 by a significant margin (see the details here).

Unlike this former hedge fund manager who is convinced Dow will soar past 40000, our long-short investment strategy doesn’t rely on bull markets to deliver double digit returns. We only rely on hedge fund buy/sell signals. We’re going to check out the key hedge fund action encompassing BanColombia S.A. (NYSE:CIB).

At Q2’s end, a total of 10 of the hedge funds tracked by Insider Monkey were long this stock, a change of -9% from the first quarter of 2019. The graph below displays the number of hedge funds with bullish position in CIB over the last 16 quarters. With the smart money’s positions undergoing their usual ebb and flow, there exists an “upper tier” of noteworthy hedge fund managers who were adding to their holdings substantially (or already accumulated large positions). 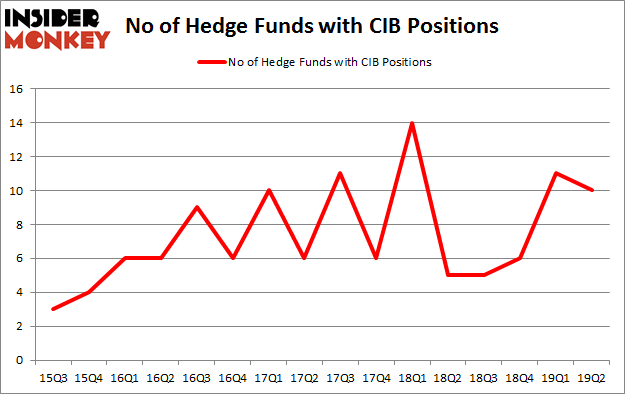 Among these funds, Polaris Capital Management held the most valuable stake in BanColombia S.A. (NYSE:CIB), which was worth $100.6 million at the end of the second quarter. On the second spot was Renaissance Technologies which amassed $21.6 million worth of shares. Moreover, Arrowstreet Capital, Millennium Management, and Orbis Investment Management were also bullish on BanColombia S.A. (NYSE:CIB), allocating a large percentage of their portfolios to this stock.

Because BanColombia S.A. (NYSE:CIB) has faced declining sentiment from the smart money, it’s easy to see that there was a specific group of funds who sold off their full holdings in the second quarter. Interestingly, Mike Vranos’s Ellington said goodbye to the biggest investment of the 750 funds followed by Insider Monkey, comprising close to $1 million in stock. Minhua Zhang’s fund, Weld Capital Management, also sold off its stock, about $0.5 million worth. These transactions are important to note, as total hedge fund interest fell by 1 funds in the second quarter.

As you can see these stocks had an average of 20.5 hedge funds with bullish positions and the average amount invested in these stocks was $537 million. That figure was $159 million in CIB’s case. Agnico Eagle Mines Limited (NYSE:AEM) is the most popular stock in this table. On the other hand Brookfield Infrastructure Partners L.P. (NYSE:BIP) is the least popular one with only 7 bullish hedge fund positions. BanColombia S.A. (NYSE:CIB) is not the least popular stock in this group but hedge fund interest is still below average. This is a slightly negative signal and we’d rather spend our time researching stocks that hedge funds are piling on. Our calculations showed that top 20 most popular stocks among hedge funds returned 24.4% in 2019 through September 30th and outperformed the S&P 500 ETF (SPY) by 4 percentage points. Unfortunately CIB wasn’t nearly as popular as these 20 stocks (hedge fund sentiment was quite bearish); CIB investors were disappointed as the stock returned -2.5% during the third quarter and underperformed the market. If you are interested in investing in large cap stocks with huge upside potential, you should check out the top 20 most popular stocks (see the video below) among hedge funds as many of these stocks already outperformed the market so far in 2019.