The financial regulations require hedge funds and wealthy investors that crossed the $100 million equity holdings threshold to file a report that shows their positions at the end of every quarter. Even though it isn’t the intention, these filings to a certain extent level the playing field for ordinary investors. The latest round of 13F filings disclosed the funds’ positions on June 28th. We at Insider Monkey have made an extensive database of nearly 750 of those established hedge funds and famous value investors’ filings. In this article, we analyze how these elite funds and prominent investors traded Banco Bilbao Vizcaya Argentaria, S.A. (NYSE:BBVA) based on those filings.

Banco Bilbao Vizcaya Argentaria, S.A. (NYSE:BBVA) investors should be aware of an increase in hedge fund interest of late. BBVA was in 7 hedge funds’ portfolios at the end of June. There were 4 hedge funds in our database with BBVA holdings at the end of the previous quarter. Our calculations also showed that BBVA isn’t among the 30 most popular stocks among hedge funds.

To most shareholders, hedge funds are perceived as worthless, outdated financial vehicles of years past. While there are more than 8000 funds in operation today, Our researchers choose to focus on the elite of this group, around 750 funds. These money managers watch over the lion’s share of the smart money’s total capital, and by keeping an eye on their inimitable stock picks, Insider Monkey has identified a few investment strategies that have historically exceeded the S&P 500 index. Insider Monkey’s flagship hedge fund strategy defeated the S&P 500 index by around 5 percentage points per year since its inception in May 2014. We were able to generate large returns even by identifying short candidates. Our portfolio of short stocks lost 25.7% since February 2017 (through September 30th) even though the market was up more than 33% during the same period. We just shared a list of 10 short targets in our latest quarterly update .

At the end of the second quarter, a total of 7 of the hedge funds tracked by Insider Monkey were long this stock, a change of 75% from one quarter earlier. On the other hand, there were a total of 5 hedge funds with a bullish position in BBVA a year ago. With hedge funds’ sentiment swirling, there exists a select group of notable hedge fund managers who were increasing their holdings significantly (or already accumulated large positions). 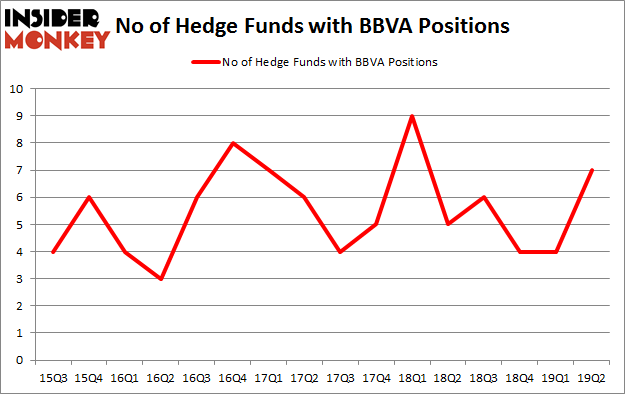 According to Insider Monkey’s hedge fund database, Fisher Asset Management, managed by Ken Fisher, holds the biggest position in Banco Bilbao Vizcaya Argentaria, S.A. (NYSE:BBVA). Fisher Asset Management has a $176.5 million position in the stock, comprising 0.2% of its 13F portfolio. The second most bullish fund manager is Two Sigma Advisors, managed by John Overdeck and David Siegel, which holds a $1.9 million position; the fund has less than 0.1%% of its 13F portfolio invested in the stock. Other peers with similar optimism contain Claes Fornell’s CSat Investment Advisory.

As you can see these stocks had an average of 46 hedge funds with bullish positions and the average amount invested in these stocks was $5439 million. That figure was $181 million in BBVA’s case. Altaba Inc. (NASDAQ:AABA) is the most popular stock in this table. On the other hand SYSCO Corporation (NYSE:SYY) is the least popular one with only 31 bullish hedge fund positions. Compared to these stocks Banco Bilbao Vizcaya Argentaria, S.A. (NYSE:BBVA) is even less popular than SYY. Hedge funds dodged a bullet by taking a bearish stance towards BBVA. Our calculations showed that the top 20 most popular hedge fund stocks returned 24.4% in 2019 through September 30th and outperformed the S&P 500 ETF (SPY) by 4 percentage points. Unfortunately BBVA wasn’t nearly as popular as these 20 stocks (hedge fund sentiment was very bearish); BBVA investors were disappointed as the stock returned -6.5% during the third quarter and underperformed the market. If you are interested in investing in large cap stocks with huge upside potential, you should check out the top 20 most popular stocks (view the video below) among hedge funds as many of these stocks already outperformed the market so far in 2019.