The elite funds run by legendary investors such as David Tepper and Dan Loeb make hundreds of millions of dollars for themselves and their investors by spending enormous resources doing research on small cap stocks that big investment banks don’t follow. Because of their pay structures, they have strong incentives to do the research necessary to beat the market. That’s why we pay close attention to what they think in small cap stocks. In this article, we take a closer look at AngloGold Ashanti Limited (NYSE:AU) from the perspective of those elite funds.

AngloGold Ashanti Limited (NYSE:AU) investors should be aware of an increase in hedge fund sentiment of late. Our calculations also showed that AU isn’t among the 30 most popular stocks among hedge funds.

If you’d ask most shareholders, hedge funds are perceived as unimportant, old financial vehicles of the past. While there are greater than 8000 funds in operation at present, We hone in on the leaders of this club, around 750 funds. Most estimates calculate that this group of people have their hands on most of all hedge funds’ total capital, and by observing their best investments, Insider Monkey has revealed various investment strategies that have historically surpassed the broader indices. Insider Monkey’s flagship hedge fund strategy beat the S&P 500 index by nearly 5 percentage points annually since its inception in May 2014 through early November 2018. We were able to generate large returns even by identifying short candidates. Our portfolio of short stocks lost 27.5% since February 2017 (through March 12th) even though the market was up nearly 25% during the same period. We just shared a list of 6 short targets in our latest quarterly update and they are already down an average of 6% in less than a month.

What does the smart money think about AngloGold Ashanti Limited (NYSE:AU)?

Heading into the first quarter of 2019, a total of 12 of the hedge funds tracked by Insider Monkey held long positions in this stock, a change of 20% from the previous quarter. By comparison, 13 hedge funds held shares or bullish call options in AU a year ago. With hedge funds’ positions undergoing their usual ebb and flow, there exists an “upper tier” of notable hedge fund managers who were adding to their stakes substantially (or already accumulated large positions). 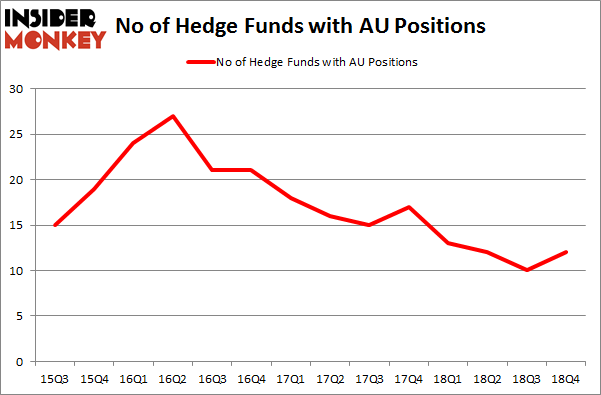 More specifically, Paulson & Co was the largest shareholder of AngloGold Ashanti Limited (NYSE:AU), with a stake worth $160.4 million reported as of the end of September. Trailing Paulson & Co was Renaissance Technologies, which amassed a stake valued at $43.1 million. Oaktree Capital Management, AQR Capital Management, and Arrowstreet Capital were also very fond of the stock, giving the stock large weights in their portfolios.

As industrywide interest jumped, key hedge funds have been driving this bullishness. Arrowstreet Capital, managed by Peter Rathjens, Bruce Clarke and John Campbell, established the largest position in AngloGold Ashanti Limited (NYSE:AU). Arrowstreet Capital had $14.1 million invested in the company at the end of the quarter. Bart Baum’s Ionic Capital Management also made a $1.3 million investment in the stock during the quarter. The other funds with brand new AU positions are Mark Broach’s Manatuck Hill Partners and Michael Platt and William Reeves’s BlueCrest Capital Mgmt..

As you can see these stocks had an average of 24.25 hedge funds with bullish positions and the average amount invested in these stocks was $664 million. That figure was $322 million in AU’s case. Equitrans Midstream Corporation (NYSE:ETRN) is the most popular stock in this table. On the other hand StoneCo Ltd. (NASDAQ:STNE) is the least popular one with only 20 bullish hedge fund positions. Compared to these stocks AngloGold Ashanti Limited (NYSE:AU) is even less popular than STNE. Our calculations showed that top 15 most popular stocks among hedge funds returned 21.3% through April 8th and outperformed the S&P 500 ETF (SPY) by more than 5 percentage points. Unfortunately AU wasn’t in this group. Hedge funds that bet on AU were disappointed as the stock returned 8.9% and underperformed the market. If you are interested in investing in large cap stocks, you should check out the top 15 hedge fund stocks as 12 of these outperformed the market.