The 700+ hedge funds and famous money managers tracked by Insider Monkey have already compiled and submitted their 13F filings for the second quarter, which unveil their equity positions as of June 28. We went through these filings, fixed typos and other more significant errors and identified the changes in hedge fund portfolios. Our extensive review of these public filings is finally over, so this article is set to reveal the smart money sentiment towards AEGON N.V. (NYSE:AEG).

AEGON N.V. (NYSE:AEG) investors should be aware of a decrease in support from the world’s most elite money managers recently. AEG was in 9 hedge funds’ portfolios at the end of the second quarter of 2019. There were 10 hedge funds in our database with AEG holdings at the end of the previous quarter. Our calculations also showed that AEG isn’t among the 30 most popular stocks among hedge funds (see the video below).

Unlike this former hedge fund manager who is convinced Dow will soar past 40000, our long-short investment strategy doesn’t rely on bull markets to deliver double digit returns. We only rely on hedge fund buy/sell signals. Let’s take a glance at the new hedge fund action surrounding AEGON N.V. (NYSE:AEG).

What have hedge funds been doing with AEGON N.V. (NYSE:AEG)?

At Q2’s end, a total of 9 of the hedge funds tracked by Insider Monkey were long this stock, a change of -10% from one quarter earlier. The graph below displays the number of hedge funds with bullish position in AEG over the last 16 quarters. With hedge funds’ capital changing hands, there exists a few notable hedge fund managers who were boosting their holdings significantly (or already accumulated large positions). 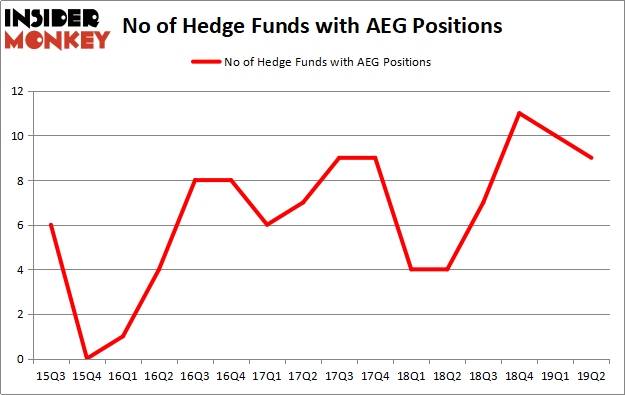 The largest stake in AEGON N.V. (NYSE:AEG) was held by Arrowstreet Capital, which reported holding $26.5 million worth of stock at the end of March. It was followed by Citadel Investment Group with a $4.7 million position. Other investors bullish on the company included Renaissance Technologies, PEAK6 Capital Management, and Weld Capital Management.

Judging by the fact that AEGON N.V. (NYSE:AEG) has experienced declining sentiment from the smart money, it’s safe to say that there lies a certain “tier” of hedge funds that elected to cut their positions entirely in the second quarter. At the top of the heap, Matthew Tewksbury’s Stevens Capital Management cut the biggest stake of the 750 funds monitored by Insider Monkey, comprising close to $0.4 million in call options. Ken Griffin’s fund, Citadel Investment Group, also said goodbye to its call options, about $0.1 million worth. These transactions are interesting, as total hedge fund interest was cut by 1 funds in the second quarter.

As you can see these stocks had an average of 24.5 hedge funds with bullish positions and the average amount invested in these stocks was $1063 million. That figure was $37 million in AEG’s case. CF Industries Holdings, Inc. (NYSE:CF) is the most popular stock in this table. On the other hand Autohome Inc (NYSE:ATHM) is the least popular one with only 16 bullish hedge fund positions. Compared to these stocks AEGON N.V. (NYSE:AEG) is even less popular than ATHM. Hedge funds dodged a bullet by taking a bearish stance towards AEG. Our calculations showed that the top 20 most popular hedge fund stocks returned 24.4% in 2019 through September 30th and outperformed the S&P 500 ETF (SPY) by 4 percentage points. Unfortunately AEG wasn’t nearly as popular as these 20 stocks (hedge fund sentiment was very bearish); AEG investors were disappointed as the stock returned -12.9% during the third quarter and underperformed the market. If you are interested in investing in large cap stocks with huge upside potential, you should check out the top 20 most popular stocks among hedge funds as many of these stocks already outperformed the market so far in 2019.

Here is What Hedge Funds Really Think About Materials, Inc. (VSM)?
Monthly Newsletter Strategy
Download a free copy of our newsletter and see the details inside!
Hedge Fund Resource Center
Related News
Is AEGON N.V. (AEG) A Good Stock To Buy? Here’s What Hedge Funds Think About AEGON N.V. (AEG) 76 Best Insurance Dividend Stocks To Invest In Here’s How This Week Has Started For The Financial Markets Should You Buy AEGON N.V. (ADR) (AEG)? Short Interest Has Jumped In These 5 Stocks Short Interest Plunged In These 5 Stocks During The First 2 Weeks of August 11 Largest Auto Insurance Companies In The US In 2019 10 Poorest Cities in America in 2019 8 Lowest Tar and Nicotine Cigarette Brands in 2019
Billionaire Hedge Funds