Insider Monkey has processed numerous 13F filings of hedge funds and famous investors to create an extensive database of hedge fund holdings. The 13F filings show the hedge funds’ and investors’ positions as of the end of the fourth quarter. You can find write-ups about an individual hedge fund’s trades on numerous financial news websites. However, in this article we will take a look at their collective moves and analyze what the smart money thinks of Advanced Micro Devices, Inc. (NASDAQ:AMD) based on that data.

Hedge fund interest in Advanced Micro Devices, Inc. (NASDAQ:AMD) shares was flat at the end of last quarter. This is usually a negative indicator. The level and the change in hedge fund popularity aren’t the only variables you need to analyze to decipher hedge funds’ perspectives. A stock may witness a boost in popularity but it may still be less popular than similarly priced stocks. That’s why at the end of this article we will examine companies such as SBA Communications Corporation (NASDAQ:SBAC), ORIX Corporation (NYSE:IX), and McCormick & Company, Incorporated (NYSE:MKC) to gather more data points. 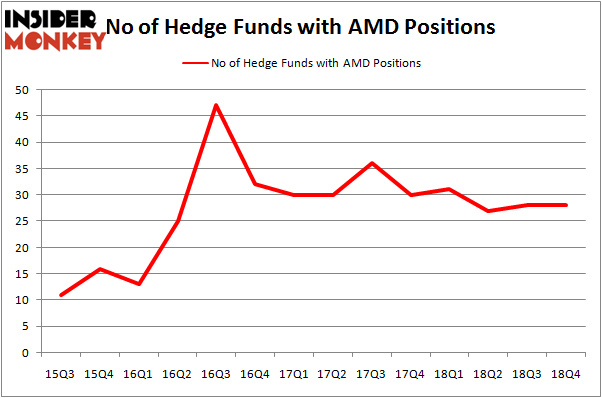 Due to the fact that Advanced Micro Devices, Inc. (NASDAQ:AMD) has experienced declining sentiment from the entirety of the hedge funds we track, we can see that there was a specific group of money managers who were dropping their positions entirely heading into Q3. Intriguingly, Nick Niell’s Arrowgrass Capital Partners dropped the largest position of the 700 funds watched by Insider Monkey, valued at an estimated $96.5 million in stock, and Ken Griffin’s Citadel Investment Group was right behind this move, as the fund dumped about $77.2 million worth. These bearish behaviors are interesting, as aggregate hedge fund interest stayed the same (this is a bearish signal in our experience).

As you can see these stocks had an average of 25.5 hedge funds with bullish positions and the average amount invested in these stocks was $609 million. That figure was $340 million in AMD’s case. Rockwell Automation Inc. (NYSE:ROK) is the most popular stock in this table. On the other hand ORIX Corporation (NYSE:IX) is the least popular one with only 7 bullish hedge fund positions. Advanced Micro Devices, Inc. (NASDAQ:AMD) is not the most popular stock in this group but hedge fund interest is still above average. Our calculations showed that top 15 most popular stocks among hedge funds returned 19.7% through March 15th and outperformed the S&P 500 ETF (SPY) by 6.6 percentage points. Hedge funds were also right about betting on AMD as the stock returned 26.2% and outperformed the market as well.