For centuries moats played an important role in keeping attackers at bay. In the modern world, entrepreneurs and established players fight for market share in a similar way. 3D printing is a hot technology and any manufacturer with staying power will need to develop a moat in order to survive. As the technology continues to develop, each company’s patent portfolio will be crucial in determining the firm’s prospects. 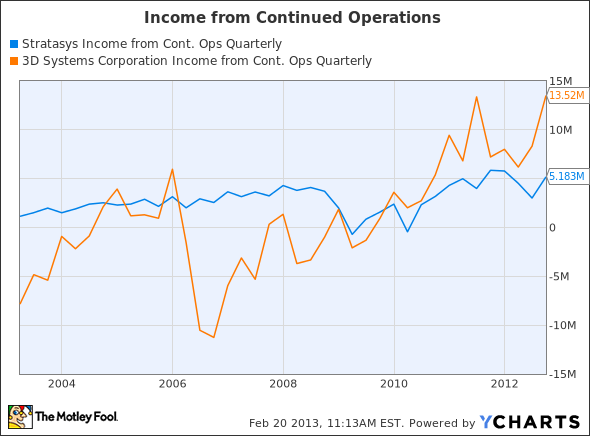 Stratasys, Ltd. (NASDAQ:SSYS) tends to focus on the professional side of the 3D printing industry. It boasts a patent portfolio with more than 500 patents and a recent Wired article shows how a number of lower end consumer printers need to careful in order to avoid infringement of Stratasys’ patents. The company recently merged with the Israeli firm Object. Object’s experience with multi-material printers will help to maintain Stratasys as an innovator.

Stratasys’ five year revenue growth rate of 8.87% and five year EPS growth rate of 6.74% are strong, but not amazing. Strong tech companies like Google have larger growth figures. Stratasys currently trades at a price to earnings growth ratio of 3.8. This is quite expensive and forces investors to count on strong growth for years and years.

3D Systems Corporation (NYSE:DDD) has had a very public life with allegations that their accounting methods miss-represent organic growth. The firm has gone on a string of acquisitions over the past couple years and this provided a large boost to revenue. These acquisitions have also grown its patent portfolio and after the purchase of Geomagic it will have over 1200 patents. 3D Systems has started to focus on the consumer market. In an effort to make 3D printing more accessible to the masses the company is trying to develop better software solutions that are easier to understand.

This company’s five year revenue growth of 13.89% is significantly strong than Stratasys’. Such numbers must be taken with a grain of salt due to 3D Systems’ large number of acquisitions. The bigger growth figures give the company a smaller price to earnings growth ratio of 1.95. This is less than Stratasys, but still expensive. A price to earnings growth ratio at or above 2 is considered high.

ExOne Co (NASDAQ:XONE) is a young company that recently IPO’d. It focuses on metal 3D printers and industrial grade solutions. Powerful lasers fuse metal particles together layer by layer to create an object. Currently, ExOne leases a number of patents from MIT and will pay them $100,000 per year for the next couple of years. ExOne’s own patent portfolio has expiration dates that range from 2013 to 2029.