Utilities have long been the quintessential example of “stodgy” or slow growing, but inherent in this business model is a good deal of consistency as well.

Among companies with enviable dividend track records, it’d be fair to suggest that Indiana-based energy holding company Vectren Corporation (NYSE:VVC) is among the most revered; having not only paid but also increased its dividends… for the last 56 years. There’s something to be said for consistency.

The company’s long dividend streak makes it a Dividend King; a select group of stocks with 50+ years of rising dividends.  You can see all the Dividend Kings here.

Here’s a breakdown of the different businesses that Vectren operates in: 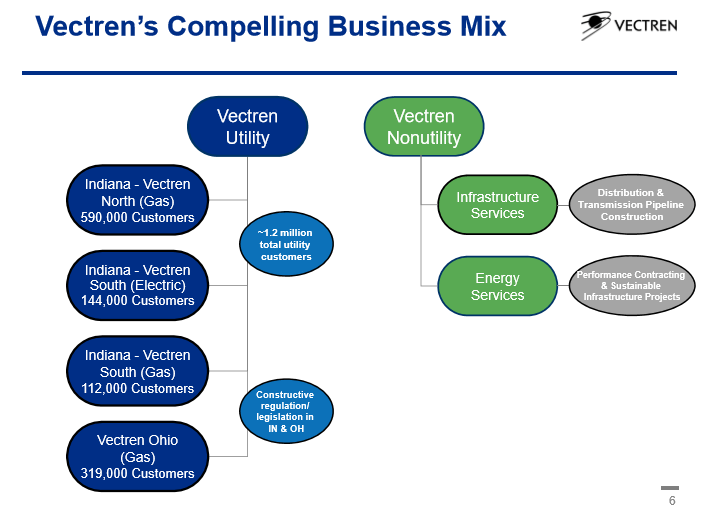 The vast majority (~80%) of the company’s earnings are from the utility side. Further, those profits are split roughly fifty-fifty between gas and electric. By 2020 the company expects this ratio to tend toward gas comprising 65% of earnings and electric to be closer to 35%.

The company describes its utility side as “delivering gas or electric to nearly one million customers in adjoining territories that cover nearly two-thirds of Indiana and about 20% of Ohio.” Here’s what that looks like geographically: 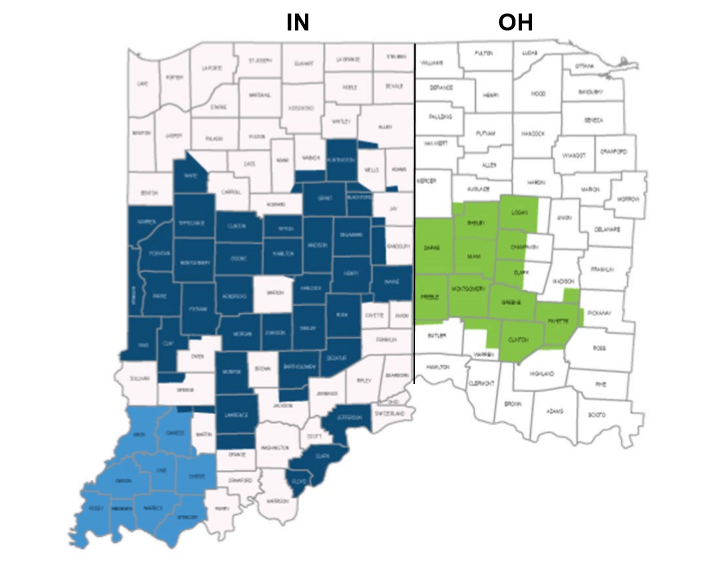 The non-utility side operates all around the country, but as mentioned above, this is not presently a large aspect of the business.

On August 3rd of 2016, Vectren reported second quarter results. Overall total net income for the quarter was $32.3 million, or $0.39 per share, compared to $35.8 million or $0.43 per share in the previous prior year period. The utility group actually saw an increase of 7.8% in earnings, but the non-utility group dragged down the total results.

For the six months ending June 30th, 2016, Vectren Corporation (NYSE:VVC) reported net income of $80.6 million ($0.97 per share) as compared to $92.8 million ($1.12 per share) in the prior year period. The utility portion of the business was flat year-over-year, but the non-utility segment once again pulled down the overall results.

The company also reiterated its consolidated earnings guidance for 2016. Vectren anticipates per share earnings to be in the $2.45 to $2.55 range for the year, with the utility group providing $2.05 to $2.10 of that amount. Interestingly, the utility group guidance was slightly increased and the non-utility group slightly decreased, resulting in an unchanged total expectation as compared to the previous guidance.

Also on August 3rd, Vectren declared a $0.40 quarterly common dividend. This marks the 56th straight year of this company and its predecessor firms increasing its payout and the fourth straight payment at this level.