Investing in small cap stocks has historically been a way to outperform the market, as small cap companies typically grow faster on average than the blue chips. That outperformance comes with a price, however, as there are occasional periods of higher volatility. The last 12 months is one of those periods, as the Russell 2000 ETF (IWM) has underperformed the larger S&P 500 ETF (SPY) by more than 10 percentage points. Given that the funds we track tend to have a disproportionate amount of their portfolios in smaller cap stocks, they have seen some volatility in their portfolios too. Actually their moves are potentially one of the factors that contributed to this volatility. In this article, we use our extensive database of hedge fund holdings to find out what the smart money thinks of Dillard’s, Inc. (NYSE:DDS).

Dillard’s, Inc. (NYSE:DDS) shares haven’t seen a lot of action during the third quarter. Overall, hedge fund sentiment was unchanged. The stock was in 20 hedge funds’ portfolios at the end of September. At the end of this article we will also compare DDS to other stocks including Mobile Mini Inc (NASDAQ:MINI), Gray Television, Inc. (NYSE:GTN), and Livongo Health, Inc. (NASDAQ:LVGO) to get a better sense of its popularity.

We leave no stone unturned when looking for the next great investment idea. For example Discover is offering this insane cashback card, so we look into shorting the stock. One of the most bullish analysts in America just put his money where his mouth is. He says, “I’m investing more today than I did back in early 2009.” So we check out his pitch. We read hedge fund investor letters and listen to stock pitches at hedge fund conferences. We even check out this option genius’ weekly trade ideas. This December, we recommended Adams Energy as a one-way bet based on an under-the-radar fund manager’s investor letter and the stock already gained 20 percent. Now we’re going to go over the recent hedge fund action encompassing Dillard’s, Inc. (NYSE:DDS). 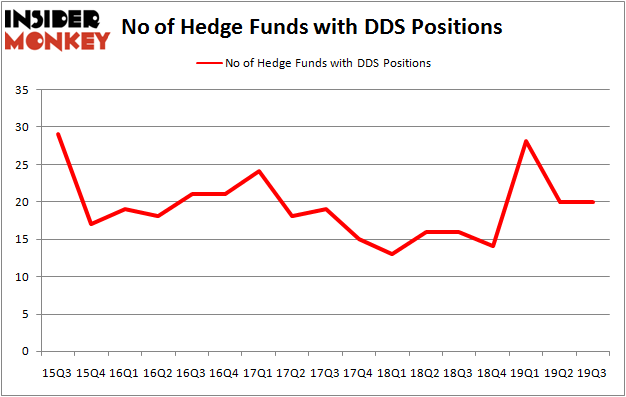 According to publicly available hedge fund and institutional investor holdings data compiled by Insider Monkey, Mason Hawkins’s Southeastern Asset Management has the most valuable position in Dillard’s, Inc. (NYSE:DDS), worth close to $134.8 million, corresponding to 2.4% of its total 13F portfolio. Coming in second is AQR Capital Management, managed by Cliff Asness, which holds a $56.5 million position; 0.1% of its 13F portfolio is allocated to the stock. Other members of the smart money with similar optimism include David Einhorn’s Greenlight Capital, and Philippe Laffont’s Coatue Management. In terms of the portfolio weights assigned to each position Southeastern Asset Management allocated the biggest weight to Dillard’s, Inc. (NYSE:DDS), around 2.35% of its 13F portfolio. Greenlight Capital is also relatively very bullish on the stock, dishing out 1.41 percent of its 13F equity portfolio to DDS.

Due to the fact that Dillard’s, Inc. (NYSE:DDS) has faced bearish sentiment from the smart money, it’s easy to see that there was a specific group of funds that elected to cut their full holdings last quarter. It’s worth mentioning that Renaissance Technologies dumped the biggest stake of the “upper crust” of funds monitored by Insider Monkey, comprising about $7.8 million in call options, and Michael Gelband’s ExodusPoint Capital was right behind this move, as the fund cut about $3.1 million worth. These moves are intriguing to say the least, as total hedge fund interest stayed the same (this is a bearish signal in our experience).

As you can see these stocks had an average of 16.75 hedge funds with bullish positions and the average amount invested in these stocks was $119 million. That figure was $266 million in DDS’s case. Gray Television, Inc. (NYSE:GTN) is the most popular stock in this table. On the other hand Heartland Financial USA Inc (NASDAQ:HTLF) is the least popular one with only 9 bullish hedge fund positions. Dillard’s, Inc. (NYSE:DDS) is not the most popular stock in this group but hedge fund interest is still above average. Our calculations showed that top 20 most popular stocks among hedge funds returned 37.4% in 2019 through the end of November and outperformed the S&P 500 ETF (SPY) by 9.9 percentage points. Hedge funds were also right about betting on DDS, though not to the same extent, as the stock returned 8.6% during the first two months of the fourth quarter and outperformed the market as well.