The latest 13F reporting period has come and gone, and Insider Monkey have plowed through 821 13F filings that hedge funds and well-known value investors are required to file by the SEC. The 13F filings show the funds’ and investors’ portfolio positions as of March 31st, a week after the market trough. Now, we are almost done with the second quarter. Investors decided to bet on the economic recovery and a stock market rebound. S&P 500 Index returned almost 20% this quarter. In this article you are going to find out whether hedge funds thoughtVertiv Holdings Co (NYSE:VRT) was a good investment heading into the second quarter and how the stock traded in comparison to the top hedge fund picks.

Vertiv Holdings Co (NYSE:VRT) shareholders have witnessed an increase in activity from the world’s largest hedge funds of late. VRT was in 39 hedge funds’ portfolios at the end of the first quarter of 2020. There were 35 hedge funds in our database with VRT positions at the end of the previous quarter. Our calculations also showed that VRT isn’t among the 30 most popular stocks among hedge funds (click for Q1 rankings and see the video for a quick look at the top 5 stocks).

At the moment there are plenty of metrics investors put to use to assess publicly traded companies. A duo of the best metrics are hedge fund and insider trading moves. Our researchers have shown that, historically, those who follow the best picks of the top fund managers can beat their index-focused peers by a solid margin (see the details here).

At Insider Monkey we scour multiple sources to uncover the next great investment idea. We read hedge fund investor letters and listen to stock pitches at hedge fund conferences. Hedge fund sentiment towards Tesla reached its all time high at the end of 2019 and Tesla shares more than tripled this year. We are trying to identify other EV revolution winners, so we are checking out this tiny lithium stock. Now we’re going to analyze the fresh hedge fund action encompassing Vertiv Holdings Co (NYSE:VRT).

What does smart money think about Vertiv Holdings Co (NYSE:VRT)?

At the end of the first quarter, a total of 39 of the hedge funds tracked by Insider Monkey held long positions in this stock, a change of 11% from one quarter earlier. On the other hand, there were a total of 28 hedge funds with a bullish position in VRT a year ago. With hedgies’ sentiment swirling, there exists an “upper tier” of noteworthy hedge fund managers who were adding to their stakes considerably (or already accumulated large positions). 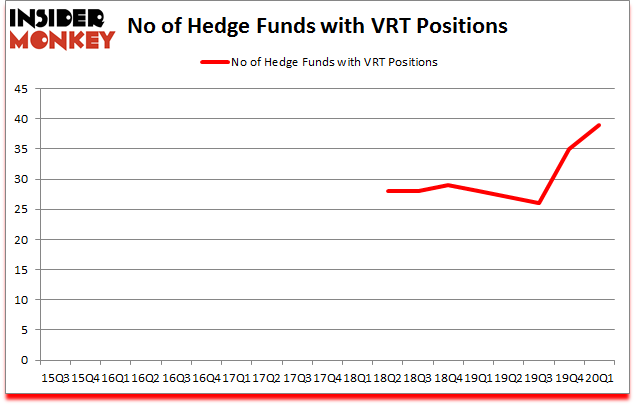 Among these funds, Eminence Capital held the most valuable stake in Vertiv Holdings Co (NYSE:VRT), which was worth $153.9 million at the end of the third quarter. On the second spot was Brahman Capital which amassed $79.7 million worth of shares. Alyeska Investment Group, Lomas Capital Management, and Locust Wood Capital Advisers were also very fond of the stock, becoming one of the largest hedge fund holders of the company. In terms of the portfolio weights assigned to each position Brahman Capital allocated the biggest weight to Vertiv Holdings Co (NYSE:VRT), around 9.37% of its 13F portfolio. Corsair Capital Management is also relatively very bullish on the stock, setting aside 8.08 percent of its 13F equity portfolio to VRT.

As aggregate interest increased, some big names were breaking ground themselves. Eminence Capital, managed by Ricky Sandler, assembled the largest position in Vertiv Holdings Co (NYSE:VRT). Eminence Capital had $153.9 million invested in the company at the end of the quarter. Daniel Lascano’s Lomas Capital Management also made a $55 million investment in the stock during the quarter. The following funds were also among the new VRT investors: Jay Petschek and Steven Major’s Corsair Capital Management, Nehal Chopra’s Ratan Capital Group, and Anand More’s SAYA Management.

As you can see these stocks had an average of 23.25 hedge funds with bullish positions and the average amount invested in these stocks was $127 million. That figure was $541 million in VRT’s case. Brixmor Property Group Inc (NYSE:BRX) is the most popular stock in this table. On the other hand Stantec Inc. (NYSE:STN) is the least popular one with only 12 bullish hedge fund positions. Compared to these stocks Vertiv Holdings Co (NYSE:VRT) is more popular among hedge funds. Our calculations showed that top 10 most popular stocks among hedge funds returned 41.4% in 2019 and outperformed the S&P 500 ETF (SPY) by 10.1 percentage points. These stocks returned 12.3% in 2020 through June 30th but still managed to beat the market by 15.5 percentage points. Hedge funds were also right about betting on VRT as the stock returned 56.8% in Q2 and outperformed the market by an even larger margin. Hedge funds were clearly right about piling into this stock relative to other stocks with similar market capitalizations.