The latest 13F reporting period has come and gone, and Insider Monkey is again at the forefront when it comes to making use of this gold mine of data. We at Insider Monkey have plowed through 821 13F filings that hedge funds and well-known value investors are required to file by the SEC. The 13F filings show the funds’ and investors’ portfolio positions as of March 31st, a week after the market trough. We are almost done with the second quarter. Investors decided to bet on the economic recovery and a stock market rebound. S&P 500 Index returned almost 20% this quarter. In this article we look at how hedge funds traded Royal Caribbean Cruises Ltd. (NYSE:RCL) and determine whether the smart money was really smart about this stock.

Royal Caribbean Cruises Ltd. (NYSE:RCL) was in 25 hedge funds’ portfolios at the end of the first quarter of 2020. RCL investors should be aware of a decrease in hedge fund sentiment recently. There were 43 hedge funds in our database with RCL holdings at the end of the previous quarter. Our calculations also showed that RCL isn’t among the 30 most popular stocks among hedge funds (click for Q1 rankings and see the video for a quick look at the top 5 stocks).

In the 21st century investor’s toolkit there are numerous indicators stock traders put to use to assess stocks. Two of the less utilized indicators are hedge fund and insider trading indicators. We have shown that, historically, those who follow the best picks of the elite fund managers can outclass the market by a superb margin (see the details here).

At Insider Monkey we scour multiple sources to uncover the next great investment idea. For example, legal marijuana is one of the fastest growing industries right now, so we are checking out stock pitches like “the Starbucks of cannabis” to identify the next tenbagger. We go through lists like the 10 most profitable companies in the world to pick the best large-cap stocks to buy. Even though we recommend positions in only a tiny fraction of the companies we analyze, we check out as many stocks as we can. We read hedge fund investor letters and listen to stock pitches at hedge fund conferences. Hedge fund sentiment towards Tesla reached its all time high at the end of 2019 and Tesla shares more than tripled this year. We are trying to identify other EV revolution winners, so if you have any good ideas send us an email. Now we’re going to check out the new hedge fund action surrounding Royal Caribbean Cruises Ltd. (NYSE:RCL).

Heading into the second quarter of 2020, a total of 25 of the hedge funds tracked by Insider Monkey held long positions in this stock, a change of -42% from one quarter earlier. On the other hand, there were a total of 47 hedge funds with a bullish position in RCL a year ago. With the smart money’s capital changing hands, there exists an “upper tier” of notable hedge fund managers who were adding to their stakes considerably (or already accumulated large positions). 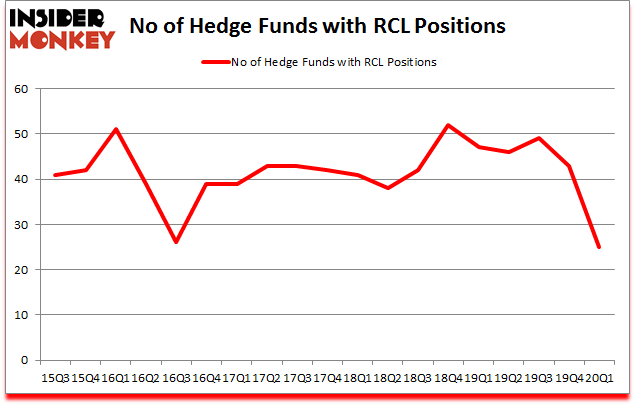 According to Insider Monkey’s hedge fund database, Eminence Capital, managed by Ricky Sandler, holds the number one position in Royal Caribbean Cruises Ltd. (NYSE:RCL). Eminence Capital has a $198.9 million position in the stock, comprising 2.2% of its 13F portfolio. The second most bullish fund manager is D E Shaw, managed by D. E. Shaw, which holds a $44.5 million position; the fund has 0.1% of its 13F portfolio invested in the stock. Some other professional money managers that are bullish comprise Peter Rathjens, Bruce Clarke and John Campbell’s Arrowstreet Capital, John W. Rogers’s Ariel Investments and Ken Griffin’s Citadel Investment Group. In terms of the portfolio weights assigned to each position Axel Capital Management allocated the biggest weight to Royal Caribbean Cruises Ltd. (NYSE:RCL), around 5.75% of its 13F portfolio. MIG Capital is also relatively very bullish on the stock, dishing out 2.68 percent of its 13F equity portfolio to RCL.

Due to the fact that Royal Caribbean Cruises Ltd. (NYSE:RCL) has experienced falling interest from the entirety of the hedge funds we track, it’s easy to see that there lies a certain “tier” of money managers who were dropping their entire stakes by the end of the first quarter. It’s worth mentioning that Andrew Immerman and Jeremy Schiffman’s Palestra Capital Management cut the largest position of the 750 funds watched by Insider Monkey, comprising about $96.3 million in stock. Ken Griffin’s fund, Citadel Investment Group, also said goodbye to its stock, about $79 million worth. These bearish behaviors are intriguing to say the least, as total hedge fund interest was cut by 18 funds by the end of the first quarter.

As you can see these stocks had an average of 31.25 hedge funds with bullish positions and the average amount invested in these stocks was $635 million. That figure was $406 million in RCL’s case. Darden Restaurants, Inc. (NYSE:DRI) is the most popular stock in this table. On the other hand Dr. Reddy’s Laboratories Limited (NYSE:RDY) is the least popular one with only 11 bullish hedge fund positions. Royal Caribbean Cruises Ltd. (NYSE:RCL) is not the least popular stock in this group but hedge fund interest is still below average. Our calculations showed that top 10 most popular stocks among hedge funds returned 41.4% in 2019 and outperformed the S&P 500 ETF (SPY) by 10.1 percentage points. These stocks gained 12.3% in 2020 through June 30th and still beat the market by 15.5 percentage points. A small number of hedge funds were also right about betting on RCL as the stock returned 56.4% during the second quarter and outperformed the market by an even larger margin.