Insider Monkey has processed numerous 13F filings of hedge funds and successful value investors to create an extensive database of hedge fund holdings. The 13F filings show the hedge funds’ and successful investors’ positions as of the end of the first quarter. You can find articles about an individual hedge fund’s trades on numerous financial news websites. However, in this article we will take a look at their collective moves over the last 4.5 years and analyze what the smart money thinks of Puma Biotechnology Inc (NYSE:PBYI) based on that data and determine whether they were really smart about the stock.

Puma Biotechnology Inc (NYSE:PBYI) investors should be aware of an increase in activity from the world’s largest hedge funds lately. Our calculations also showed that PBYI isn’t among the 30 most popular stocks among hedge funds (click for Q1 rankings and see the video for a quick look at the top 5 stocks).

At Insider Monkey we scour multiple sources to uncover the next great investment idea. Hedge fund sentiment towards Tesla reached its all time high at the end of 2019 and Tesla shares more than tripled this year. We are trying to identify other EV revolution winners, so we are checking out this under-the-radar lithium stock. We go through lists like the 10 most profitable companies in the world to pick the best large-cap stocks to buy. Even though we recommend positions in only a tiny fraction of the companies we analyze, we check out as many stocks as we can. We read hedge fund investor letters and listen to stock pitches at hedge fund conferences. If you want to find out the best healthcare stock to buy right now, you can watch our latest hedge fund manager interview here. With all of this in mind we’re going to take a gander at the latest hedge fund action surrounding Puma Biotechnology Inc (NYSE:PBYI).

What does smart money think about Puma Biotechnology Inc (NYSE:PBYI)?

At the end of the first quarter, a total of 20 of the hedge funds tracked by Insider Monkey were bullish on this stock, a change of 18% from one quarter earlier. Below, you can check out the change in hedge fund sentiment towards PBYI over the last 18 quarters. So, let’s review which hedge funds were among the top holders of the stock and which hedge funds were making big moves. 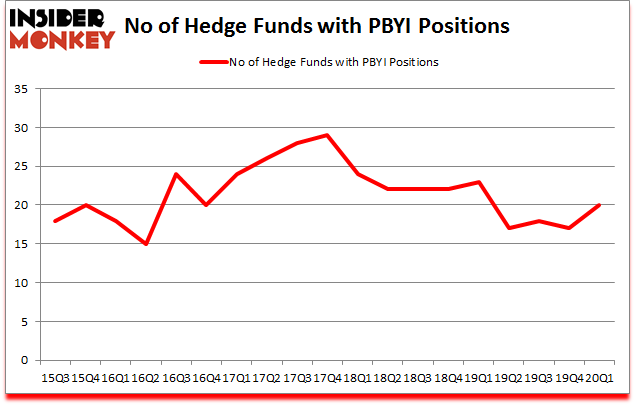 Of the funds tracked by Insider Monkey, Oleg Nodelman’s EcoR1 Capital has the biggest position in Puma Biotechnology Inc (NYSE:PBYI), worth close to $21.4 million, accounting for 2.2% of its total 13F portfolio. Sitting at the No. 2 spot is Camber Capital Management, managed by Stephen DuBois, which holds a $16.5 million position; the fund has 1% of its 13F portfolio invested in the stock. Some other members of the smart money that hold long positions consist of Israel Englander’s Millennium Management, William Leland Edwards’s Palo Alto Investors and Renaissance Technologies. In terms of the portfolio weights assigned to each position EcoR1 Capital allocated the biggest weight to Puma Biotechnology Inc (NYSE:PBYI), around 2.24% of its 13F portfolio. Palo Alto Investors is also relatively very bullish on the stock, dishing out 0.99 percent of its 13F equity portfolio to PBYI.

With a general bullishness amongst the heavyweights, key money managers were breaking ground themselves. EcoR1 Capital, managed by Oleg Nodelman, established the most outsized position in Puma Biotechnology Inc (NYSE:PBYI). EcoR1 Capital had $21.4 million invested in the company at the end of the quarter. Stephen DuBois’s Camber Capital Management also made a $16.5 million investment in the stock during the quarter. The other funds with brand new PBYI positions are Aaron Cowen’s Suvretta Capital Management, Efrem Kamen’s Pura Vida Investments, and Kamran Moghtaderi’s Eversept Partners.

Let’s check out hedge fund activity in other stocks – not necessarily in the same industry as Puma Biotechnology Inc (NYSE:PBYI) but similarly valued. We will take a look at Betterware de Mexico, S.A. de C.V. (NASDAQ:BWMX), AMC Entertainment Holdings Inc (NYSE:AMC), Enerplus Corp (NYSE:ERF), and Citizens, Inc. (NYSE:CIA). All of these stocks’ market caps are similar to PBYI’s market cap.

As you can see these stocks had an average of 8.5 hedge funds with bullish positions and the average amount invested in these stocks was $21 million. That figure was $100 million in PBYI’s case. Enerplus Corp (NYSE:ERF) is the most popular stock in this table. On the other hand Betterware de Mexico, S.A. de C.V. (NASDAQ:BWMX) is the least popular one with only 2 bullish hedge fund positions. Compared to these stocks Puma Biotechnology Inc (NYSE:PBYI) is more popular among hedge funds. Our calculations showed that top 10 most popular stocks among hedge funds returned 41.4% in 2019 and outperformed the S&P 500 ETF (SPY) by 10.1 percentage points. These stocks gained 18.6% in 2020 through July 27th and still beat the market by 17.1 percentage points. Unfortunately PBYI wasn’t nearly as popular as these 10 stocks and hedge funds that were betting on PBYI were disappointed as the stock returned 19.1% since the end of the first quarter and underperformed the market. If you are interested in investing in large cap stocks with huge upside potential, you should check out the top 10 most popular stocks among hedge funds as most of these stocks already outperformed the market in 2020.