The latest 13F reporting period has come and gone, and Insider Monkey is again at the forefront when it comes to making use of this gold mine of data. We have processed the filings of the more than 700 world-class investment firms that we track and now have access to the collective wisdom contained in these filings, which are based on their December 31 holdings, data that is available nowhere else. Should you consider Covia Holdings Corporation (NYSE:CVIA) for your portfolio? We’ll look to this invaluable collective wisdom for the answer.

Covia Holdings Corporation (NYSE:CVIA) investors should pay attention to a decrease in enthusiasm from smart money recently. CVIA was in 5 hedge funds’ portfolios at the end of the fourth quarter of 2018. There were 7 hedge funds in our database with CVIA holdings at the end of the previous quarter. Our calculations also showed that CVIA isn’t among the 30 most popular stocks among hedge funds. 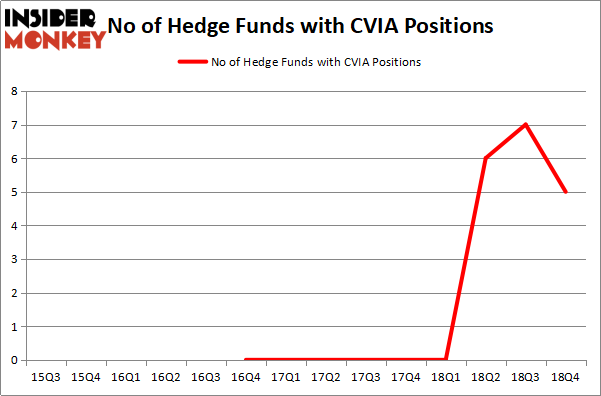 According to Insider Monkey’s hedge fund database, SailingStone Capital Partners, managed by MacKenzie B. Davis and Kenneth L. Settles Jr, holds the largest position in Covia Holdings Corporation (NYSE:CVIA). SailingStone Capital Partners has a $44.5 million position in the stock, comprising 2.9% of its 13F portfolio. The second most bullish fund manager is Citadel Investment Group, managed by Ken Griffin, which holds a $0.3 million position; the fund has less than 0.1%% of its 13F portfolio invested in the stock. Remaining hedge funds and institutional investors that are bullish contain Frederick DiSanto’s Ancora Advisors, Israel Englander’s Millennium Management and Charles Paquelet’s Skylands Capital.

Since Covia Holdings Corporation (NYSE:CVIA) has faced a decline in interest from the aggregate hedge fund industry, we can see that there was a specific group of hedge funds who were dropping their positions entirely heading into Q3. At the top of the heap, Cliff Asness’s AQR Capital Management said goodbye to the largest investment of the 700 funds followed by Insider Monkey, comprising about $0.9 million in stock. Brandon Haley’s fund, Holocene Advisors, also sold off its stock, about $0.4 million worth. These moves are important to note, as aggregate hedge fund interest was cut by 2 funds heading into Q3.

As you can see these stocks had an average of 9.25 hedge funds with bullish positions and the average amount invested in these stocks was $45 million. That figure was $45 million in CVIA’s case. CAI International Inc (NYSE:CAI) is the most popular stock in this table. On the other hand Access National Corporation (NASDAQ:ANCX) is the least popular one with only 2 bullish hedge fund positions. Covia Holdings Corporation (NYSE:CVIA) is not the least popular stock in this group but hedge fund interest is still below average. Our calculations showed that top 15 most popular stocks) among hedge funds returned 24.2% through April 22nd and outperformed the S&P 500 ETF (SPY) by more than 7 percentage points. A small number of hedge funds were also right about betting on CVIA as the stock returned 83.9% and outperformed the market by an even larger margin.