Did Hedge Funds Drop The Ball On Zscaler, Inc. (ZS) ?

The government requires hedge funds and wealthy investors that crossed the $100 million equity holdings threshold are required to file a report that shows their positions at the end of every quarter. Even though it isn’t the intention, these filings level the playing field for ordinary investors. The latest round of 13F filings disclosed the funds’ positions on December 31. We at Insider Monkey have made an extensive database of nearly 750 of those elite funds and prominent investors’ filings. In this article, we analyze how these elite funds and prominent investors traded Zscaler, Inc. (NASDAQ:ZS) based on those filings.

Zscaler, Inc. (NASDAQ:ZS) investors should be aware of a decrease in support from the world’s most elite money managers of late. ZS was in 17 hedge funds’ portfolios at the end of the fourth quarter of 2018. There were 28 hedge funds in our database with ZS holdings at the end of the previous quarter. Our calculations also showed that ZS isn’t among the 30 most popular stocks among hedge funds. 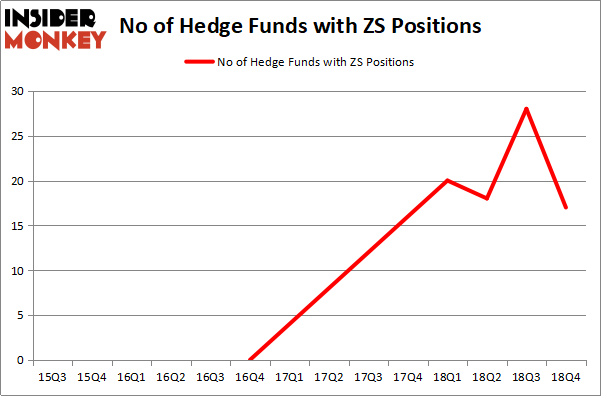 Among these funds, Alkeon Capital Management held the most valuable stake in Zscaler, Inc. (NASDAQ:ZS), which was worth $26.8 million at the end of the third quarter. On the second spot was Driehaus Capital which amassed $21.8 million worth of shares. Moreover, D E Shaw, Renaissance Technologies, and Sandler Capital Management were also bullish on Zscaler, Inc. (NASDAQ:ZS), allocating a large percentage of their portfolios to this stock.

Since Zscaler, Inc. (NASDAQ:ZS) has faced a decline in interest from the entirety of the hedge funds we track, it’s easy to see that there lies a certain “tier” of fund managers who were dropping their full holdings in the third quarter. Intriguingly, Josh Donfeld and David Rogers’s Castle Hook Partners dumped the biggest stake of the “upper crust” of funds monitored by Insider Monkey, worth close to $23.7 million in stock. Leon Shaulov’s fund, Maplelane Capital, also cut its stock, about $21.4 million worth. These moves are important to note, as total hedge fund interest dropped by 11 funds in the third quarter.

As you can see these stocks had an average of 31.5 hedge funds with bullish positions and the average amount invested in these stocks was $479 million. That figure was $92 million in ZS’s case. WPX Energy Inc (NYSE:WPX) is the most popular stock in this table. On the other hand EPR Properties (NYSE:EPR) is the least popular one with only 22 bullish hedge fund positions. Compared to these stocks Zscaler, Inc. (NASDAQ:ZS) is even less popular than EPR. Hedge funds clearly dropped the ball on ZS as the stock delivered strong returns, though hedge funds’ consensus picks still generated respectable returns. Our calculations showed that top 15 most popular stocks) among hedge funds returned 24.2% through April 22nd and outperformed the S&P 500 ETF (SPY) by more than 7 percentage points. A small number of hedge funds were also right about betting on ZS as the stock returned 63.9% and outperformed the market by an even larger margin.