Did Hedge Funds Drop The Ball On Xperi Corporation (XPER) ?

The Insider Monkey team has completed processing the quarterly 13F filings for the December quarter submitted by the hedge funds and other money managers included in our extensive database. Most hedge fund investors endured a torrid quarter, which certainly propelled them to adjust their equity holdings so as to maintain the desired risk profile. As a result, the relevancy of these public filings and their content is indisputable, as they may reveal numerous high-potential stocks. The following article will discuss the smart money sentiment towards Xperi Corporation (NASDAQ:XPER).

Is Xperi Corporation (NASDAQ:XPER) the right investment to pursue these days? Money managers are reducing their bets on the stock. The number of bullish hedge fund positions retreated by 1 in recent months. Our calculations also showed that xper isn’t among the 30 most popular stocks among hedge funds. 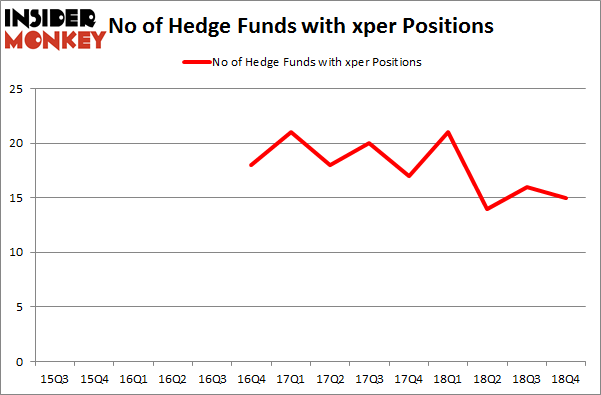 Among these funds, Nokomis Capital held the most valuable stake in Xperi Corporation (NASDAQ:XPER), which was worth $29.8 million at the end of the fourth quarter. On the second spot was Trigran Investments which amassed $16.8 million worth of shares. Moreover, D E Shaw, Hawk Ridge Management, and Carlson Capital were also bullish on Xperi Corporation (NASDAQ:XPER), allocating a large percentage of their portfolios to this stock.

We view hedge fund activity in the stock unfavorable, but in this case there was only a single hedge fund selling its entire position: Ellington. One hedge fund selling its entire position doesn’t always imply a bearish intent. Theoretically a hedge fund may decide to sell a promising position in order to invest the proceeds in a more promising idea. However, we don’t think this is the case in this case because none of the 700+ hedge funds tracked by Insider Monkey identified XPER as a viable investment and initiated a position in the stock.

As you can see these stocks had an average of 8.75 hedge funds with bullish positions and the average amount invested in these stocks was $65 million. That figure was $108 million in XPER’s case. Addus Homecare Corporation (NASDAQ:ADUS) is the most popular stock in this table. On the other hand AGM Group Holdings Inc. (NASDAQ:AGMH) is the least popular one with only 1 bullish hedge fund positions. Compared to these stocks Xperi Corporation (NASDAQ:XPER) is more popular among hedge funds. Our calculations showed that top 15 most popular stocks) among hedge funds returned 24.2% through April 22nd and outperformed the S&P 500 ETF (SPY) by more than 7 percentage points. Hedge funds were also right about betting on XPER as the stock returned 35.6% and outperformed the market by an even larger margin. Hedge funds were clearly right about piling into this stock relative to other stocks with similar market capitalizations.