Legendary investors such as Jeffrey Talpins and Seth Klarman earn enormous amounts of money for themselves and their investors by doing in-depth research on small-cap stocks that big brokerage houses don’t publish. Small cap stocks -especially when they are screened well- can generate substantial outperformance versus a boring index fund. That’s why we analyze the activity of those elite funds in these small-cap stocks. In the following paragraphs, we analyze Wyndham Destinations, Inc. (NYSE:WYND) from the perspective of those elite funds.

Wyndham Destinations, Inc. (NYSE:WYND) shareholders have witnessed a decrease in enthusiasm from smart money of late. WYND was in 20 hedge funds’ portfolios at the end of December. There were 22 hedge funds in our database with WYND holdings at the end of the previous quarter. Our calculations also showed that wynd isn’t among the 30 most popular stocks among hedge funds.

In the 21st century investor’s toolkit there are numerous methods stock market investors put to use to analyze their stock investments. A couple of the best methods are hedge fund and insider trading indicators. We have shown that, historically, those who follow the best picks of the top money managers can outpace the market by a significant amount (see the details here). 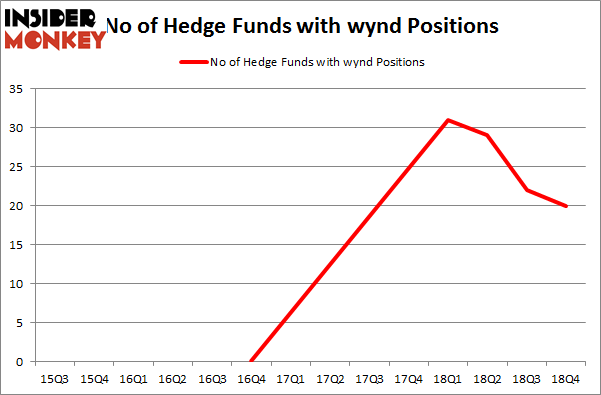 The largest stake in Wyndham Destinations, Inc. (NYSE:WYND) was held by Iridian Asset Management, which reported holding $326.5 million worth of stock at the end of September. It was followed by Tremblant Capital with a $47.5 million position. Other investors bullish on the company included Millennium Management, Renaissance Technologies, and D E Shaw.

Judging by the fact that Wyndham Destinations, Inc. (NYSE:WYND) has witnessed falling interest from the entirety of the hedge funds we track, it’s easy to see that there exists a select few hedgies that elected to cut their full holdings in the third quarter. Interestingly, Jeffrey Gates’s Gates Capital Management dumped the biggest position of the “upper crust” of funds tracked by Insider Monkey, valued at about $61.1 million in stock, and Per Johanssoná’s Bodenholm Capital was right behind this move, as the fund dumped about $42.7 million worth. These moves are intriguing to say the least, as aggregate hedge fund interest fell by 2 funds in the third quarter.

As you can see these stocks had an average of 24.75 hedge funds with bullish positions and the average amount invested in these stocks was $603 million. That figure was $474 million in WYND’s case. Peabody Energy Corporation (NYSE:BTU) is the most popular stock in this table. On the other hand Trex Company, Inc. (NYSE:TREX) is the least popular one with only 14 bullish hedge fund positions. Wyndham Destinations, Inc. (NYSE:WYND) is not the least popular stock in this group but hedge fund interest is still below average. Our calculations showed that top 15 most popular stocks) among hedge funds returned 24.2% through April 22nd and outperformed the S&P 500 ETF (SPY) by more than 7 percentage points. A small number of hedge funds were also right about betting on WYND, though not to the same extent, as the stock returned 21% and outperformed the market as well.