We at Insider Monkey have gone over 700 13F filings that hedge funds and prominent investors are required to file by the SEC The 13F filings show the funds’ and investors’ portfolio positions as of December 31st. In this article, we look at what those funds think of Whiting Petroleum Corporation (NYSE:WLL) based on that data.

Is Whiting Petroleum Corporation (NYSE:WLL) a safe investment right now? The best stock pickers are turning less bullish. The number of long hedge fund positions shrunk by 6 recently. Our calculations also showed that wll isn’t among the 30 most popular stocks among hedge funds. WLL was in 33 hedge funds’ portfolios at the end of the fourth quarter of 2018. There were 39 hedge funds in our database with WLL holdings at the end of the previous quarter. 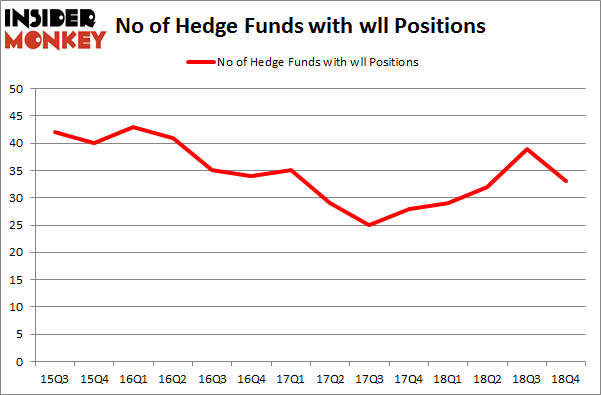 More specifically, Fine Capital Partners was the largest shareholder of Whiting Petroleum Corporation (NYSE:WLL), with a stake worth $98.4 million reported as of the end of September. Trailing Fine Capital Partners was GMT Capital, which amassed a stake valued at $42.2 million. Encompass Capital Advisors, Capital Growth Management, and Renaissance Technologies were also very fond of the stock, giving the stock large weights in their portfolios.

Because Whiting Petroleum Corporation (NYSE:WLL) has witnessed declining sentiment from the aggregate hedge fund industry, it’s safe to say that there is a sect of money managers who sold off their positions entirely in the third quarter. At the top of the heap, Paul Reeder and Edward Shapiro’s PAR Capital Management cut the largest stake of all the hedgies watched by Insider Monkey, totaling an estimated $170.7 million in stock, and David Cohen and Harold Levy’s Iridian Asset Management was right behind this move, as the fund dropped about $102.3 million worth. These moves are intriguing to say the least, as total hedge fund interest dropped by 6 funds in the third quarter.

As you can see these stocks had an average of 17 hedge funds with bullish positions and the average amount invested in these stocks was $92 million. That figure was $356 million in WLL’s case. II-VI, Inc. (NASDAQ:IIVI) is the most popular stock in this table. On the other hand Main Street Capital Corporation (NYSE:MAIN) is the least popular one with only 9 bullish hedge fund positions. Compared to these stocks Whiting Petroleum Corporation (NYSE:WLL) is more popular among hedge funds. Our calculations showed that top 15 most popular stocks) among hedge funds returned 24.2% through April 22nd and outperformed the S&P 500 ETF (SPY) by more than 7 percentage points. Hedge funds were also right about betting on WLL as the stock returned 29.4% and outperformed the market by an even larger margin. Hedge funds were clearly right about piling into this stock relative to other stocks with similar market capitalizations.