There are several ways to beat the market, and investing in small cap stocks has historically been one of them. We like to improve the odds of beating the market further by examining what famous hedge fund operators such as Jeff Ubben, George Soros and Carl Icahn think. Those hedge fund operators make billions of dollars each year by hiring the best and the brightest to do research on stocks, including small cap stocks that big brokerage houses simply don’t cover. Because of Carl Icahn and other elite funds’ exemplary historical records, we pay attention to their small cap picks. In this article, we use hedge fund filing data to analyze Voya Financial Inc (NYSE:VOYA).

Voya Financial Inc (NYSE:VOYA) shares haven’t seen a lot of action during the third quarter. Overall, hedge fund sentiment was unchanged. The stock was in 38 hedge funds’ portfolios at the end of the fourth quarter of 2018. The level and the change in hedge fund popularity aren’t the only variables you need to analyze to decipher hedge funds’ perspectives. A stock may witness a boost in popularity but it may still be less popular than similarly priced stocks. That’s why at the end of this article we will examine companies such as Berry Global Group Inc (NYSE:BERY), Old Republic International Corporation (NYSE:ORI), and Liberty Property Trust (NYSE:LPT) to gather more data points.

How have hedgies been trading Voya Financial Inc (NYSE:VOYA)?

At Q4’s end, a total of 38 of the hedge funds tracked by Insider Monkey were long this stock, a change of 0% from the second quarter of 2018. By comparison, 41 hedge funds held shares or bullish call options in VOYA a year ago. With hedgies’ capital changing hands, there exists a select group of key hedge fund managers who were boosting their stakes considerably (or already accumulated large positions). 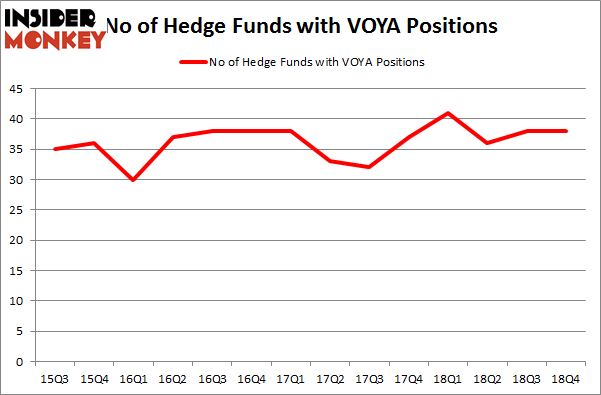 Among these funds, Pzena Investment Management held the most valuable stake in Voya Financial Inc (NYSE:VOYA), which was worth $398.9 million at the end of the third quarter. On the second spot was Samlyn Capital which amassed $113.5 million worth of shares. Moreover, Citadel Investment Group, Levin Capital Strategies, and Greenlight Capital were also bullish on Voya Financial Inc (NYSE:VOYA), allocating a large percentage of their portfolios to this stock.

Due to the fact that Voya Financial Inc (NYSE:VOYA) has experienced a decline in interest from the entirety of the hedge funds we track, it’s safe to say that there was a specific group of hedge funds who sold off their entire stakes by the end of the third quarter. At the top of the heap, Matthew Mark’s Jet Capital Investors dumped the biggest investment of the “upper crust” of funds watched by Insider Monkey, worth close to $88.8 million in stock, and Louis Bacon’s Moore Global Investments was right behind this move, as the fund cut about $47.2 million worth. These moves are interesting, as aggregate hedge fund interest stayed the same (this is a bearish signal in our experience).

As you can see these stocks had an average of 25.25 hedge funds with bullish positions and the average amount invested in these stocks was $699 million. That figure was $989 million in VOYA’s case. Berry Global Group Inc (NYSE:BERY) is the most popular stock in this table. On the other hand Kimco Realty Corp (NYSE:KIM) is the least popular one with only 16 bullish hedge fund positions. Voya Financial Inc (NYSE:VOYA) is not the most popular stock in this group but hedge fund interest is still above average. This is a slightly positive signal but we’d rather spend our time researching stocks that hedge funds are piling on. Our calculations showed that top 15 most popular stocks among hedge funds returned 21.3% through April 8th and outperformed the S&P 500 ETF (SPY) by more than 5 percentage points. Hedge funds were also right about betting on VOYA as the stock returned 30.9% and outperformed the market as well.