How do we determine whether Virtus Investment Partners Inc (NASDAQ:VRTS) makes for a good investment at the moment? We analyze the sentiment of a select group of the very best investors in the world, who spend immense amounts of time and resources studying companies. They may not always be right (no one is), but data shows that their consensus long positions have historically outperformed the market when we adjust for known risk factors.

Virtus Investment Partners Inc (NASDAQ:VRTS) has seen a decrease in activity from the world’s largest hedge funds recently. Our calculations also showed that vrts isn’t among the 30 most popular stocks among hedge funds.

What have hedge funds been doing with Virtus Investment Partners Inc (NASDAQ:VRTS)?

Heading into the first quarter of 2019, a total of 11 of the hedge funds tracked by Insider Monkey held long positions in this stock, a change of -15% from the second quarter of 2018. Below, you can check out the change in hedge fund sentiment towards VRTS over the last 14 quarters. With hedgies’ sentiment swirling, there exists an “upper tier” of key hedge fund managers who were increasing their holdings significantly (or already accumulated large positions). 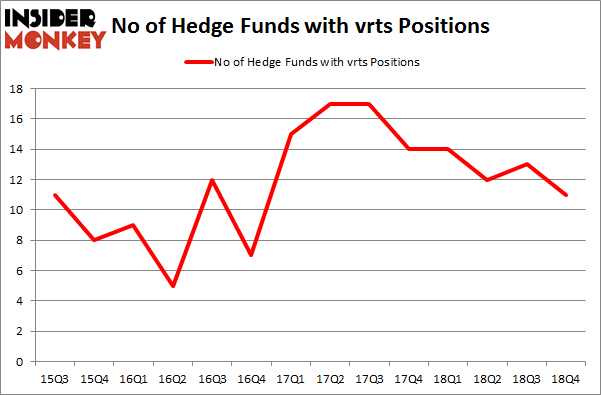 When looking at the institutional investors followed by Insider Monkey, Mangrove Partners, managed by Nathaniel August, holds the largest position in Virtus Investment Partners Inc (NASDAQ:VRTS). Mangrove Partners has a $23.5 million position in the stock, comprising 3.1% of its 13F portfolio. On Mangrove Partners’s heels is Joe Huber of Huber Capital Management, with a $18.8 million position; the fund has 1.7% of its 13F portfolio invested in the stock. Other members of the smart money that hold long positions comprise D. E. Shaw’s D E Shaw, Ken Griffin’s Citadel Investment Group and Noah Levy and Eugene Dozortsev’s Newtyn Management.

Because Virtus Investment Partners Inc (NASDAQ:VRTS) has witnessed falling interest from the smart money, it’s safe to say that there were a few money managers who sold off their full holdings last quarter. At the top of the heap, Malcolm Fairbairn’s Ascend Capital cut the biggest stake of the 700 funds followed by Insider Monkey, totaling close to $2.4 million in stock, and Israel Englander’s Millennium Management was right behind this move, as the fund sold off about $1.2 million worth. These moves are interesting, as aggregate hedge fund interest dropped by 2 funds last quarter.

As you can see these stocks had an average of 14.25 hedge funds with bullish positions and the average amount invested in these stocks was $126 million. That figure was $73 million in VRTS’s case. Akebia Therapeutics Inc (NASDAQ:AKBA) is the most popular stock in this table. On the other hand Peoples Utah Bancorp (NASDAQ:PUB) is the least popular one with only 3 bullish hedge fund positions. Virtus Investment Partners Inc (NASDAQ:VRTS) is not the least popular stock in this group but hedge fund interest is still below average. Our calculations showed that top 15 most popular stocks) among hedge funds returned 24.2% through April 22nd and outperformed the S&P 500 ETF (SPY) by more than 7 percentage points. A small number of hedge funds were also right about betting on VRTS as the stock returned 50.8% and outperformed the market by an even larger margin.