We are still in an overall bull market and many stocks that smart money investors were piling into surged through the end of November. Among them, Facebook and Microsoft ranked among the top 3 picks and these stocks gained 54% and 51% respectively. Hedge funds’ top 3 stock picks returned 41.7% this year and beat the S&P 500 ETFs by 14 percentage points. Investing in index funds guarantees you average returns, not superior returns. We are looking to generate superior returns for our readers. That’s why we believe it isn’t a waste of time to check out hedge fund sentiment before you invest in a stock like Venator Materials PLC (NYSE:VNTR).

Venator Materials PLC (NYSE:VNTR) investors should be aware of a decrease in enthusiasm from smart money recently. VNTR was in 17 hedge funds’ portfolios at the end of September. There were 18 hedge funds in our database with VNTR positions at the end of the previous quarter. Our calculations also showed that VNTR isn’t among the 30 most popular stocks among hedge funds (click for Q3 rankings and see the video below for Q2 rankings).

We leave no stone unturned when looking for the next great investment idea. For example Europe is set to become the world’s largest cannabis market, so we check out this European marijuana stock pitch. One of the most bullish analysts in America just put his money where his mouth is. He says, “I’m investing more today than I did back in early 2009.” So we check out his pitch. We read hedge fund investor letters and listen to stock pitches at hedge fund conferences. We also rely on the best performing hedge funds‘ buy/sell signals. Let’s take a look at the fresh hedge fund action regarding Venator Materials PLC (NYSE:VNTR).

What have hedge funds been doing with Venator Materials PLC (NYSE:VNTR)?

Heading into the fourth quarter of 2019, a total of 17 of the hedge funds tracked by Insider Monkey held long positions in this stock, a change of -6% from the previous quarter. By comparison, 19 hedge funds held shares or bullish call options in VNTR a year ago. With the smart money’s positions undergoing their usual ebb and flow, there exists a select group of noteworthy hedge fund managers who were upping their holdings considerably (or already accumulated large positions). 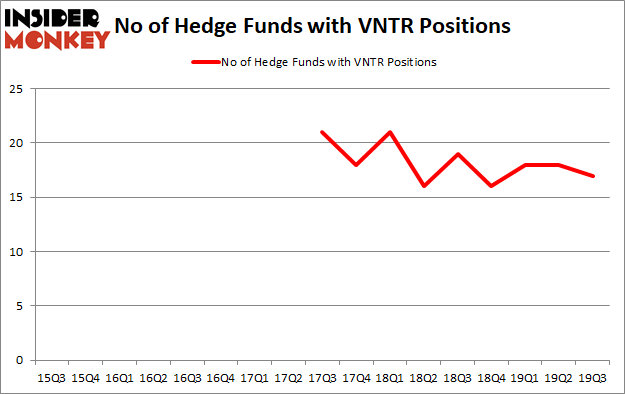 More specifically, Adage Capital Management was the largest shareholder of Venator Materials PLC (NYSE:VNTR), with a stake worth $17.2 million reported as of the end of September. Trailing Adage Capital Management was Luminus Management, which amassed a stake valued at $7.3 million. Southeastern Asset Management, Two Sigma Advisors, and Renaissance Technologies were also very fond of the stock, becoming one of the largest hedge fund holders of the company. In terms of the portfolio weights assigned to each position Fondren Management allocated the biggest weight to Venator Materials PLC (NYSE:VNTR), around 0.51% of its 13F portfolio. Luminus Management is also relatively very bullish on the stock, dishing out 0.21 percent of its 13F equity portfolio to VNTR.

Because Venator Materials PLC (NYSE:VNTR) has witnessed falling interest from the smart money, we can see that there were a few hedgies who were dropping their full holdings by the end of the third quarter. Interestingly, Louis Bacon’s Moore Global Investments dropped the biggest stake of all the hedgies followed by Insider Monkey, totaling an estimated $3.3 million in stock, and Steve Cohen’s Point72 Asset Management was right behind this move, as the fund dumped about $2.6 million worth. These moves are intriguing to say the least, as aggregate hedge fund interest fell by 1 funds by the end of the third quarter.

Let’s check out hedge fund activity in other stocks – not necessarily in the same industry as Venator Materials PLC (NYSE:VNTR) but similarly valued. We will take a look at Pacific City Financial Corporation (NASDAQ:PCB), Oil-Dri Corporation of America (NYSE:ODC), Stellus Capital Investment Corporation (NYSE:SCM), and The Joint Corp. (NASDAQ:JYNT). This group of stocks’ market caps are similar to VNTR’s market cap.

As you can see these stocks had an average of 6 hedge funds with bullish positions and the average amount invested in these stocks was $31 million. That figure was $36 million in VNTR’s case. The Joint Corp. (NASDAQ:JYNT) is the most popular stock in this table. On the other hand Pacific City Financial Corporation (NASDAQ:PCB) is the least popular one with only 4 bullish hedge fund positions. Compared to these stocks Venator Materials PLC (NYSE:VNTR) is more popular among hedge funds. Our calculations showed that top 20 most popular stocks among hedge funds returned 37.4% in 2019 through the end of November and outperformed the S&P 500 ETF (SPY) by 9.9 percentage points. Hedge funds were also right about betting on VNTR as the stock returned 51.2% during the first two months of Q4 and outperformed the market by an even larger margin. Hedge funds were clearly right about piling into this stock relative to other stocks with similar market capitalizations.

Is Oaktree Specialty Lending Corporation (OCSL) Going to Burn These Hedge Funds...
Monthly Newsletter Strategy
Download a free copy of our newsletter and see the details inside!
Hedge Fund Resource Center
Related News
Is Venator Materials PLC (VNTR) A Good Stock To Buy? Did Hedge Funds Drop The Ball On Venator Materials PLC (VNTR) ? 10 Stocks That Went Up During The 2008 Crash 10 Movies About Amnesia on Netflix 20 Countries With Highest Military Spending In The World
Billionaire Hedge Funds