Legendary investors such as Jeffrey Talpins and Seth Klarman earn enormous amounts of money for themselves and their investors by doing in-depth research on small-cap stocks that big brokerage houses don’t publish. Small cap stocks -especially when they are screened well- can generate substantial outperformance versus a boring index fund. That’s why we analyze the activity of those elite funds in these small-cap stocks. In the following paragraphs, we analyze Ultragenyx Pharmaceutical Inc (NASDAQ:RARE) from the perspective of those elite funds.

At Q4’s end, a total of 14 of the hedge funds tracked by Insider Monkey held long positions in this stock, a change of -18% from the second quarter of 2018. Below, you can check out the change in hedge fund sentiment towards RARE over the last 14 quarters. With hedge funds’ sentiment swirling, there exists an “upper tier” of noteworthy hedge fund managers who were increasing their holdings significantly (or already accumulated large positions). 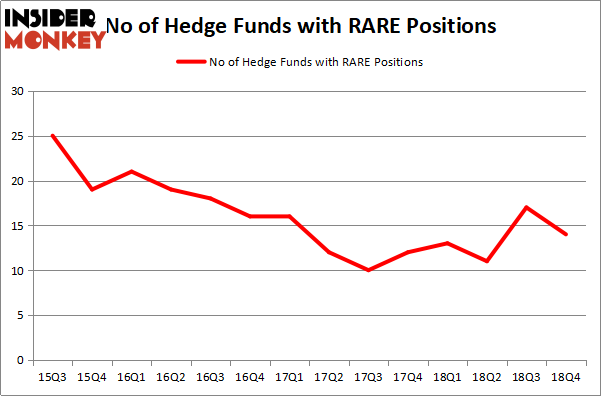 Seeing as Ultragenyx Pharmaceutical Inc (NASDAQ:RARE) has faced bearish sentiment from the entirety of the hedge funds we track, it’s safe to say that there exists a select few hedgies who were dropping their full holdings in the third quarter. Intriguingly, Oleg Nodelman’s EcoR1 Capital dropped the biggest stake of all the hedgies monitored by Insider Monkey, worth an estimated $24.8 million in stock. James A. Silverman’s fund, Opaleye Management, also cut its stock, about $6.1 million worth. These transactions are important to note, as total hedge fund interest fell by 3 funds in the third quarter.

As you can see these stocks had an average of 15.75 hedge funds with bullish positions and the average amount invested in these stocks was $195 million. That figure was $106 million in RARE’s case. Greif, Inc. (NYSE:GEF) is the most popular stock in this table. On the other hand Shenandoah Telecommunications Company (NASDAQ:SHEN) is the least popular one with only 11 bullish hedge fund positions. Ultragenyx Pharmaceutical Inc (NASDAQ:RARE) is not the least popular stock in this group but hedge fund interest is still below average. Our calculations showed that top 15 most popular stocks) among hedge funds returned 24.2% through April 22nd and outperformed the S&P 500 ETF (SPY) by more than 7 percentage points. A small number of hedge funds were also right about betting on RARE as the stock returned 50.3% and outperformed the market by an even larger margin.