Is The Ultimate Software Group, Inc. (NASDAQ:ULTI) a good investment right now? We check hedge fund and billionaire investor sentiment before delving into hours of research. Hedge funds spend millions of dollars on Ivy League graduates, expert networks, and get tips from investment bankers and industry insiders. Sure they sometimes fail miserably but historically their consensus stock picks outperformed the market after adjusting for known risk factors.

Is The Ultimate Software Group, Inc. (NASDAQ:ULTI) a buy here? Hedge funds are getting less bullish. The number of bullish hedge fund positions were cut by 5 lately. Our calculations also showed that ULTI isn’t among the 30 most popular stocks among hedge funds.

At Q4’s end, a total of 20 of the hedge funds tracked by Insider Monkey were bullish on this stock, a change of -20% from the previous quarter. The graph below displays the number of hedge funds with bullish position in ULTI over the last 14 quarters. With hedgies’ positions undergoing their usual ebb and flow, there exists a select group of notable hedge fund managers who were upping their stakes considerably (or already accumulated large positions). 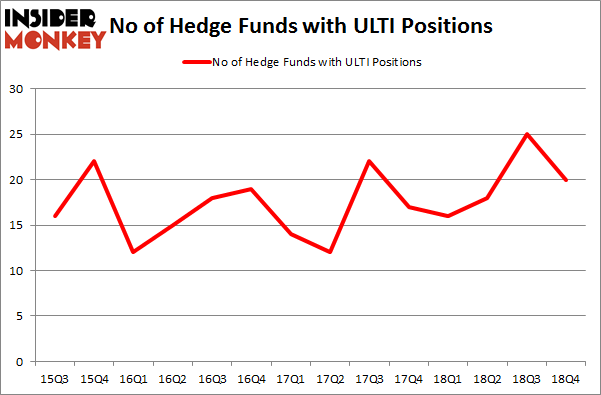 More specifically, Citadel Investment Group was the largest shareholder of The Ultimate Software Group, Inc. (NASDAQ:ULTI), with a stake worth $107.1 million reported as of the end of September. Trailing Citadel Investment Group was Millennium Management, which amassed a stake valued at $34.6 million. Echo Street Capital Management, Balyasny Asset Management, and Carlson Capital were also very fond of the stock, giving the stock large weights in their portfolios.

Because The Ultimate Software Group, Inc. (NASDAQ:ULTI) has experienced bearish sentiment from hedge fund managers, we can see that there is a sect of hedgies who sold off their positions entirely in the third quarter. It’s worth mentioning that Principal Global Investors’s Columbus Circle Investors dropped the largest position of the “upper crust” of funds watched by Insider Monkey, worth close to $34.9 million in stock, and Paul Marshall and Ian Wace’s Marshall Wace LLP was right behind this move, as the fund sold off about $9.4 million worth. These bearish behaviors are interesting, as aggregate hedge fund interest fell by 5 funds in the third quarter.

As you can see these stocks had an average of 29.5 hedge funds with bullish positions and the average amount invested in these stocks was $1506 million. That figure was $289 million in ULTI’s case. VICI Properties Inc. (NYSE:VICI) is the most popular stock in this table. On the other hand FactSet Research Systems Inc. (NYSE:FDS) is the least popular one with only 20 bullish hedge fund positions. Compared to these stocks The Ultimate Software Group, Inc. (NASDAQ:ULTI) is even less popular than FDS. Considering that hedge funds aren’t fond of this stock in relation to other companies analyzed in this article, it may be a good idea to analyze it in detail and understand why the smart money isn’t behind this stock. This isn’t necessarily bad news. Although it is possible that hedge funds may think the stock is overpriced and view the stock as a short candidate, they may not be very familiar with the bullish thesis. Our calculations showed that top 15 most popular stocks among hedge funds returned 21.3% through April 8th and outperformed the S&P 500 ETF (SPY) by more than 5 percentage points. Hedge funds were also right about betting on ULTI as the stock returned 34.9% and outperformed the market as well. You can see the entire list of these shrewd hedge funds here.