At Insider Monkey, we pore over the filings of nearly 750 top investment firms every quarter, a process we have now completed for the latest reporting period. The data we’ve gathered as a result gives us access to a wealth of collective knowledge based on these firms’ portfolio holdings as of September 30. In this article, we will use that wealth of knowledge to determine whether or not U.S. Auto Parts Network, Inc. (NASDAQ:PRTS) makes for a good investment right now.

Hedge fund interest in U.S. Auto Parts Network, Inc. (NASDAQ:PRTS) shares was flat at the end of last quarter. This is usually a negative indicator. The level and the change in hedge fund popularity aren’t the only variables you need to analyze to decipher hedge funds’ perspectives. A stock may witness a boost in popularity but it may still be less popular than similarly priced stocks. That’s why at the end of this article we will examine companies such as Huttig Building Products, Inc. (NASDAQ:HBP), Finjan Holdings, Inc. (NASDAQ:FNJN), and ASLAN Pharmaceuticals Limited (NASDAQ:ASLN) to gather more data points. Our calculations also showed that PRTS isn’t among the 30 most popular stocks among hedge funds (see the video below). 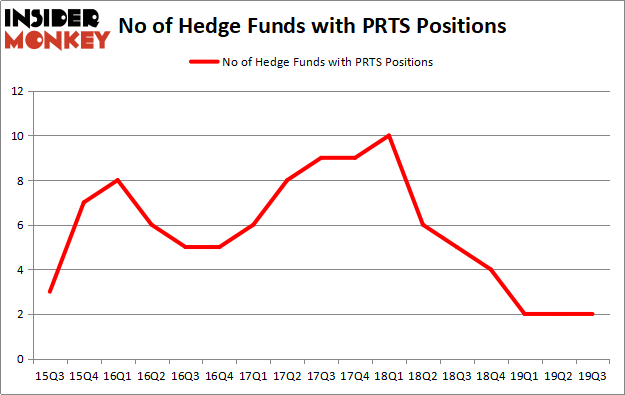 The largest stake in U.S. Auto Parts Network, Inc. (NASDAQ:PRTS) was held by Renaissance Technologies, which reported holding $2.3 million worth of stock at the end of September. It was followed by Cannell Capital with a $1.8 million position.

As you can see these stocks had an average of 2.25 hedge funds with bullish positions and the average amount invested in these stocks was $2 million. That figure was $4 million in PRTS’s case. Finjan Holdings, Inc. (NASDAQ:FNJN) is the most popular stock in this table. On the other hand ASLAN Pharmaceuticals Limited (NASDAQ:ASLN) is the least popular one with only 1 bullish hedge fund positions. U.S. Auto Parts Network, Inc. (NASDAQ:PRTS) is not the least popular stock in this group but hedge fund interest is still below average. Our calculations showed that top 20 most popular stocks among hedge funds returned 34.7% in 2019 through November 22nd and outperformed the S&P 500 ETF (SPY) by 8.5 percentage points. A small number of hedge funds were also right about betting on PRTS as the stock returned 49% during Q4 (through 11/22) and outperformed the market by an even larger margin.