Did Hedge Funds Drop The Ball On Tucows Inc. (TCX) ?

Tucows Inc. (NASDAQ:TCX) shareholders have witnessed a decrease in hedge fund sentiment in recent months. TCX was in 7 hedge funds’ portfolios at the end of December. There were 9 hedge funds in our database with TCX positions at the end of the previous quarter. Our calculations also showed that TCX isn’t among the 30 most popular stocks among hedge funds.

We’re going to take a look at the key hedge fund action regarding Tucows Inc. (NASDAQ:TCX).

How have hedgies been trading Tucows Inc. (NASDAQ:TCX)? 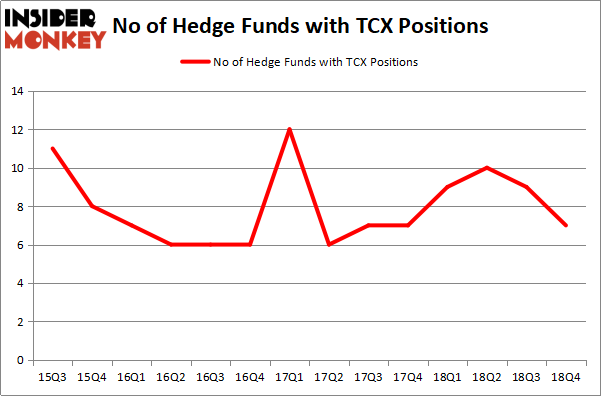 More specifically, Renaissance Technologies was the largest shareholder of Tucows Inc. (NASDAQ:TCX), with a stake worth $26.2 million reported as of the end of December. Trailing Renaissance Technologies was Osmium Partners, which amassed a stake valued at $16 million. Lyon Street Capital, Citadel Investment Group, and PEAK6 Capital Management were also very fond of the stock, giving the stock large weights in their portfolios.

Because Tucows Inc. (NASDAQ:TCX) has witnessed bearish sentiment from the entirety of the hedge funds we track, it’s easy to see that there were a few hedgies who sold off their full holdings heading into Q3. Intriguingly, Ken Griffin’s Citadel Investment Group dumped the biggest stake of the 700 funds watched by Insider Monkey, totaling an estimated $1.1 million in stock, and Noam Gottesman’s GLG Partners was right behind this move, as the fund sold off about $0.8 million worth. These transactions are interesting, as total hedge fund interest dropped by 2 funds heading into Q3.

Let’s go over hedge fund activity in other stocks – not necessarily in the same industry as Tucows Inc. (NASDAQ:TCX) but similarly valued. These stocks are Quad/Graphics, Inc. (NYSE:QUAD), SurModics, Inc. (NASDAQ:SRDX), AC Immune SA (NASDAQ:ACIU), and GoPro Inc (NASDAQ:GPRO). All of these stocks’ market caps are similar to TCX’s market cap.

As you can see these stocks had an average of 14.5 hedge funds with bullish positions and the average amount invested in these stocks was $74 million. That figure was $48 million in TCX’s case. Quad/Graphics, Inc. (NYSE:QUAD) is the most popular stock in this table. On the other hand AC Immune SA (NASDAQ:ACIU) is the least popular one with only 8 bullish hedge fund positions. Compared to these stocks Tucows Inc. (NASDAQ:TCX) is even less popular than ACIU. Hedge funds clearly dropped the ball on TCX as the stock delivered strong returns, though hedge funds’ consensus picks still generated respectable returns. Our calculations showed that top 15 most popular stocks) among hedge funds returned 24.2% through April 22nd and outperformed the S&P 500 ETF (SPY) by more than 7 percentage points. A small number of hedge funds were also right about betting on TCX as the stock returned 47.6% and outperformed the market by an even larger margin.