Did Hedge Funds Drop The Ball On Tricida, Inc. (TCDA) ?

Tricida, Inc. (NASDAQ:TCDA) investors should be aware of a decrease in hedge fund sentiment of late. Our calculations also showed that TCDA isn’t among the 30 most popular stocks among hedge funds. 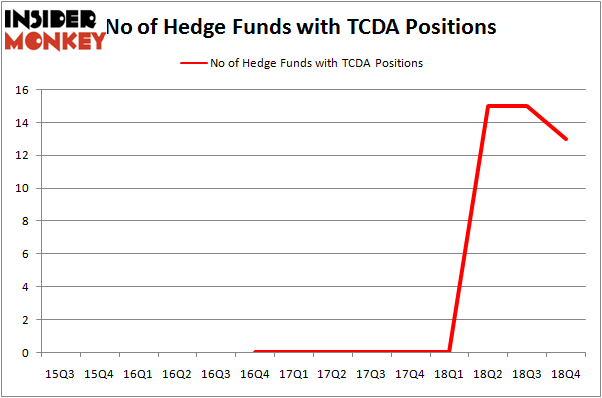 Among these funds, OrbiMed Advisors held the most valuable stake in Tricida, Inc. (NASDAQ:TCDA), which was worth $256.8 million at the end of the fourth quarter. On the second spot was venBio Select Advisor which amassed $41.3 million worth of shares. Moreover, Baker Bros. Advisors, Vivo Capital, and Cormorant Asset Management were also bullish on Tricida, Inc. (NASDAQ:TCDA), allocating a large percentage of their portfolios to this stock.

Judging by the fact that Tricida, Inc. (NASDAQ:TCDA) has witnessed declining sentiment from the smart money, it’s safe to say that there exists a select few fund managers that elected to cut their entire stakes heading into Q3. It’s worth mentioning that Phill Gross and Robert Atchinson’s Adage Capital Management sold off the biggest investment of the “upper crust” of funds monitored by Insider Monkey, comprising about $14.1 million in stock. Benjamin A. Smith’s fund, Laurion Capital Management, also cut its stock, about $3.2 million worth. These moves are interesting, as aggregate hedge fund interest was cut by 2 funds heading into Q3.

As you can see these stocks had an average of 12 hedge funds with bullish positions and the average amount invested in these stocks was $70 million. That figure was $406 million in TCDA’s case. Cardiovascular Systems Inc (NASDAQ:CSII) is the most popular stock in this table. On the other hand ConvergeOne Holdings, Inc. (NASDAQ:CVON) is the least popular one with only 5 bullish hedge fund positions. Tricida, Inc. (NASDAQ:TCDA) is not the most popular stock in this group but hedge fund interest is still above average. Our calculations showed that top 15 most popular stocks) among hedge funds returned 24.2% through April 22nd and outperformed the S&P 500 ETF (SPY) by more than 7 percentage points. Hedge funds were also right about betting on TCDA as the stock returned 32.7% and outperformed the market by an even larger margin. Hedge funds were rewarded for their relative bullishness.