Did Hedge Funds Drop The Ball On Tredegar Corporation (TG) ?

Is Tredegar Corporation (NYSE:TG) a good equity to bet on right now? We like to check what the smart money thinks first before doing extensive research on a given stock. Although there have been several high profile failed hedge fund picks, the consensus picks among hedge fund investors have historically outperformed the market after adjusting for known risk attributes. It’s not surprising given that hedge funds have access to better information and more resources to predict the winners in the stock market.

Is Tredegar Corporation (NYSE:TG) a splendid investment right now? Investors who are in the know are getting less optimistic. The number of bullish hedge fund positions went down by 1 recently. Our calculations also showed that TG isn’t among the 30 most popular stocks among hedge funds (see the video below).

In the 21st century investor’s toolkit there are a large number of metrics investors employ to appraise publicly traded companies. Some of the most underrated metrics are hedge fund and insider trading sentiment. Our experts have shown that, historically, those who follow the best picks of the top fund managers can beat the S&P 500 by a healthy margin (see the details here).

What does smart money think about Tredegar Corporation (NYSE:TG)?

At the end of the second quarter, a total of 11 of the hedge funds tracked by Insider Monkey were long this stock, a change of -8% from the previous quarter. Below, you can check out the change in hedge fund sentiment towards TG over the last 16 quarters. With the smart money’s positions undergoing their usual ebb and flow, there exists a few noteworthy hedge fund managers who were adding to their holdings substantially (or already accumulated large positions). 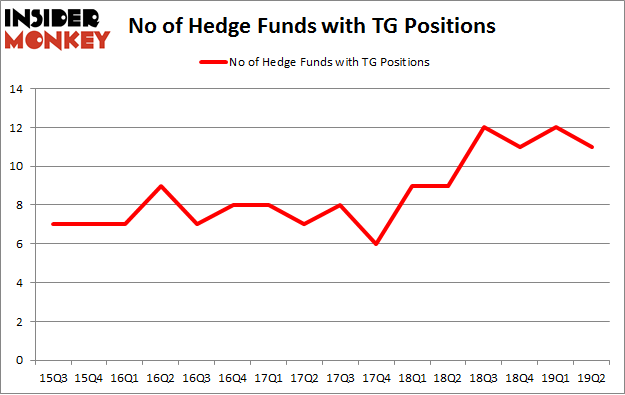 More specifically, GAMCO Investors was the largest shareholder of Tredegar Corporation (NYSE:TG), with a stake worth $61.3 million reported as of the end of March. Trailing GAMCO Investors was Arrowstreet Capital, which amassed a stake valued at $0.9 million. D E Shaw, Winton Capital Management, and Renaissance Technologies were also very fond of the stock, giving the stock large weights in their portfolios.

Judging by the fact that Tredegar Corporation (NYSE:TG) has faced falling interest from hedge fund managers, we can see that there is a sect of money managers that slashed their positions entirely last quarter. Interestingly, Israel Englander’s Millennium Management cut the largest position of all the hedgies tracked by Insider Monkey, valued at close to $1.2 million in stock. Ken Griffin’s fund, Citadel Investment Group, also dumped its stock, about $0.5 million worth. These bearish behaviors are interesting, as total hedge fund interest dropped by 1 funds last quarter.

As you can see these stocks had an average of 12.25 hedge funds with bullish positions and the average amount invested in these stocks was $93 million. That figure was $66 million in TG’s case. Matrix Service Company (NASDAQ:MTRX) is the most popular stock in this table. On the other hand Re/Max Holdings Inc (NYSE:RMAX) is the least popular one with only 10 bullish hedge fund positions. Tredegar Corporation (NYSE:TG) is not the least popular stock in this group but hedge fund interest is still below average. Our calculations showed that top 20 most popular stocks among hedge funds returned 24.4% in 2019 through September 30th and outperformed the S&P 500 ETF (SPY) by 4 percentage points. A small number of hedge funds were also right about betting on TG as the stock returned 18.2% during the same time frame and outperformed the market by an even larger margin.