As we already know from media reports and hedge fund investor letters, hedge funds delivered their best returns in a decade. Most investors who decided to stick with hedge funds after a rough 2018 recouped their losses by the end of the second quarter. We get to see hedge funds’ thoughts towards the market and individual stocks by aggregating their quarterly portfolio movements and reading their investor letters. In this article, we will particularly take a look at what hedge funds think about Toyota Motor Corporation (NYSE:TM).

Is Toyota Motor Corporation (NYSE:TM) worth your attention right now? Prominent investors are getting less optimistic. The number of bullish hedge fund bets dropped by 2 in recent months. Our calculations also showed that TM isn’t among the 30 most popular stocks among hedge funds. TM was in 8 hedge funds’ portfolios at the end of June. There were 10 hedge funds in our database with TM holdings at the end of the previous quarter.

In the financial world there are many formulas investors have at their disposal to value their stock investments. A duo of the less known formulas are hedge fund and insider trading indicators. Our experts have shown that, historically, those who follow the best picks of the best hedge fund managers can trounce the S&P 500 by a very impressive amount (see the details here).

Unlike some fund managers who are betting on Dow reaching 40000 in a year, our long-short investment strategy doesn’t rely on bull markets to deliver double digit returns. We only rely on hedge fund buy/sell signals. We’re going to take a peek at the key hedge fund action encompassing Toyota Motor Corporation (NYSE:TM).

What does smart money think about Toyota Motor Corporation (NYSE:TM)?

Heading into the third quarter of 2019, a total of 8 of the hedge funds tracked by Insider Monkey were long this stock, a change of -20% from the first quarter of 2019. On the other hand, there were a total of 13 hedge funds with a bullish position in TM a year ago. With hedge funds’ sentiment swirling, there exists an “upper tier” of notable hedge fund managers who were upping their stakes considerably (or already accumulated large positions). 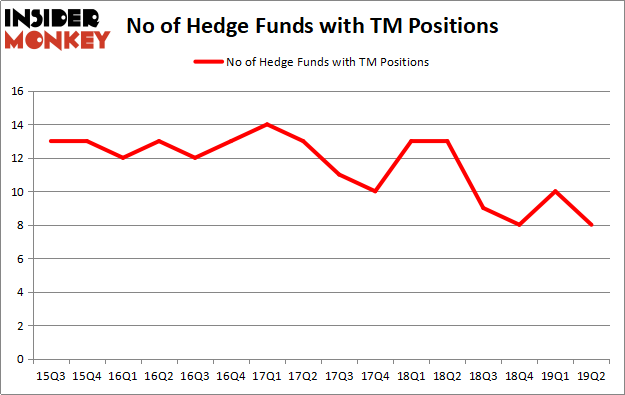 Among these funds, Renaissance Technologies held the most valuable stake in Toyota Motor Corporation (NYSE:TM), which was worth $131.2 million at the end of the second quarter. On the second spot was Adage Capital Management which amassed $47.6 million worth of shares. Moreover, PEAK6 Capital Management, D E Shaw, and Centiva Capital were also bullish on Toyota Motor Corporation (NYSE:TM), allocating a large percentage of their portfolios to this stock.

Because Toyota Motor Corporation (NYSE:TM) has experienced declining sentiment from the entirety of the hedge funds we track, we can see that there lies a certain “tier” of hedgies that slashed their positions entirely last quarter. At the top of the heap, Matthew Hulsizer’s PEAK6 Capital Management dropped the largest position of all the hedgies tracked by Insider Monkey, comprising an estimated $1.7 million in stock. Dmitry Balyasny’s fund, Balyasny Asset Management, also cut its stock, about $0.9 million worth. These moves are intriguing to say the least, as total hedge fund interest was cut by 2 funds last quarter.

As you can see these stocks had an average of 15.25 hedge funds with bullish positions and the average amount invested in these stocks was $1200 million. That figure was $193 million in TM’s case. Anheuser-Busch InBev SA/NV (NYSE:BUD) is the most popular stock in this table. On the other hand The Unilever Group (NYSE:UL) is the least popular one with only 10 bullish hedge fund positions. Compared to these stocks Toyota Motor Corporation (NYSE:TM) is even less popular than UL. Hedge funds clearly dropped the ball on TM as the stock delivered strong returns, though hedge funds’ consensus picks still generated respectable returns. Our calculations showed that top 20 most popular stocks among hedge funds returned 24.4% in 2019 through September 30th and outperformed the S&P 500 ETF (SPY) by 4 percentage points. A small number of hedge funds were also right about betting on TM as the stock returned 8.5% during the third quarter and outperformed the market by an even larger margin.

Did Hedge Funds Drop The Ball On About Activision Blizzard, Inc. (ATVI) ?
Monthly Newsletter Strategy
Download a free copy of our newsletter and see the details inside!
Hedge Fund Resource Center
Related News
Is Toyota Motor Corporation (TM) A Good Stock To Buy? Is Toyota Motor Corporation (NYSE:TM) A Good Stock To Buy? 11 Luxury Car Brands and Parent Companies 6 Car Brands That Will Capture The Future 10 Most Loved Companies in America 10 Most Profitable Companies in the World in 2017 Top 10 Luxury Car Brands In The World 10 Biggest Companies That Offer Pensions 15 Wealthiest Families in the World vs. First Generation Ultra Billionaires 5 Makeup Companies that Don’t Test on Animals
Billionaire Hedge Funds