There are several ways to beat the market, and investing in small cap stocks has historically been one of them. We like to improve the odds of beating the market further by examining what famous hedge fund operators such as Jeff Ubben, George Soros and Carl Icahn think. Those hedge fund operators make billions of dollars each year by hiring the best and the brightest to do research on stocks, including small cap stocks that big brokerage houses simply don’t cover. Because of Carl Icahn and other elite funds’ exemplary historical records, we pay attention to their small cap picks. In this article, we use hedge fund filing data to analyze Tower Semiconductor Ltd. (NASDAQ:TSEM).

Is Tower Semiconductor Ltd. (NASDAQ:TSEM) worth your attention right now? Hedge funds are taking a pessimistic view. The number of long hedge fund positions shrunk by 1 in recent months. Our calculations also showed that TSEM isn’t among the 30 most popular stocks among hedge funds (see the video below). TSEM was in 11 hedge funds’ portfolios at the end of June. There were 12 hedge funds in our database with TSEM positions at the end of the previous quarter.

In the financial world there are a large number of formulas stock market investors put to use to value stocks. A pair of the most innovative formulas are hedge fund and insider trading indicators. We have shown that, historically, those who follow the best picks of the top investment managers can outpace the broader indices by a healthy margin (see the details here). 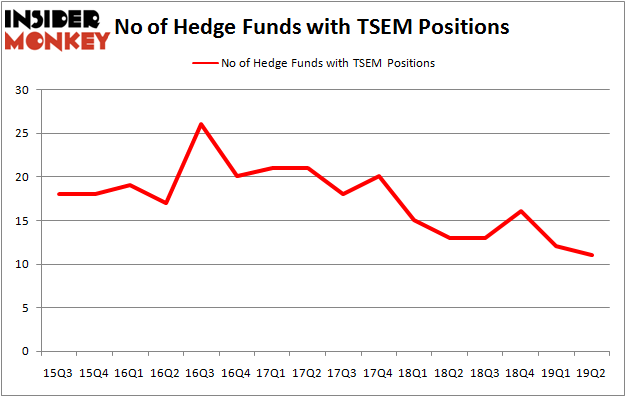 Heading into the third quarter of 2019, a total of 11 of the hedge funds tracked by Insider Monkey held long positions in this stock, a change of -8% from the previous quarter. By comparison, 13 hedge funds held shares or bullish call options in TSEM a year ago. With hedgies’ capital changing hands, there exists an “upper tier” of notable hedge fund managers who were increasing their stakes meaningfully (or already accumulated large positions).

Among these funds, Rima Senvest Management held the most valuable stake in Tower Semiconductor Ltd. (NASDAQ:TSEM), which was worth $136.9 million at the end of the second quarter. On the second spot was D E Shaw which amassed $50.4 million worth of shares. Moreover, Renaissance Technologies, Citadel Investment Group, and Two Sigma Advisors were also bullish on Tower Semiconductor Ltd. (NASDAQ:TSEM), allocating a large percentage of their portfolios to this stock.

Since Tower Semiconductor Ltd. (NASDAQ:TSEM) has witnessed a decline in interest from hedge fund managers, we can see that there lies a certain “tier” of hedge funds who were dropping their positions entirely by the end of the second quarter. Interestingly, David Costen Haley’s HBK Investments dumped the largest investment of the 750 funds tracked by Insider Monkey, worth an estimated $1.7 million in stock. Gavin Saitowitz and Cisco J. del Valle’s fund, Springbok Capital, also said goodbye to its stock, about $0.1 million worth. These bearish behaviors are intriguing to say the least, as aggregate hedge fund interest fell by 1 funds by the end of the second quarter.

As you can see these stocks had an average of 17 hedge funds with bullish positions and the average amount invested in these stocks was $154 million. That figure was $237 million in TSEM’s case. SailPoint Technologies Holdings, Inc. (NYSE:SAIL) is the most popular stock in this table. On the other hand Kronos Worldwide, Inc. (NYSE:KRO) is the least popular one with only 12 bullish hedge fund positions. Compared to these stocks Tower Semiconductor Ltd. (NASDAQ:TSEM) is even less popular than KRO. Hedge funds clearly dropped the ball on TSEM as the stock delivered strong returns, though hedge funds’ consensus picks still generated respectable returns. Our calculations showed that top 20 most popular stocks among hedge funds returned 24.4% in 2019 through September 30th and outperformed the S&P 500 ETF (SPY) by 4 percentage points. A small number of hedge funds were also right about betting on TSEM as the stock returned 22% during the third quarter and outperformed the market by an even larger margin.