Like everyone else, elite investors make mistakes. Some of their top consensus picks, such as Amazon, Facebook and Alibaba, have not done well in Q4 due to various reasons. Nevertheless, the data show elite investors’ consensus picks have done well on average over the long-term. The top 20 stocks among hedge funds beat the S&P 500 Index ETF by 4 percentage points so far this year. Because their consensus picks have done well, we pay attention to what elite funds think before doing extensive research on a stock. In this article, we take a closer look at Tower International Inc (NYSE:TOWR) from the perspective of those elite funds.

Tower International Inc (NYSE:TOWR) investors should pay attention to a decrease in hedge fund sentiment in recent months. TOWR was in 9 hedge funds’ portfolios at the end of June. There were 13 hedge funds in our database with TOWR holdings at the end of the previous quarter. Our calculations also showed that TOWR isn’t among the 30 most popular stocks among hedge funds (see the video below).

At the end of the second quarter, a total of 9 of the hedge funds tracked by Insider Monkey were bullish on this stock, a change of -31% from the first quarter of 2019. On the other hand, there were a total of 13 hedge funds with a bullish position in TOWR a year ago. With hedge funds’ sentiment swirling, there exists an “upper tier” of key hedge fund managers who were upping their holdings meaningfully (or already accumulated large positions). 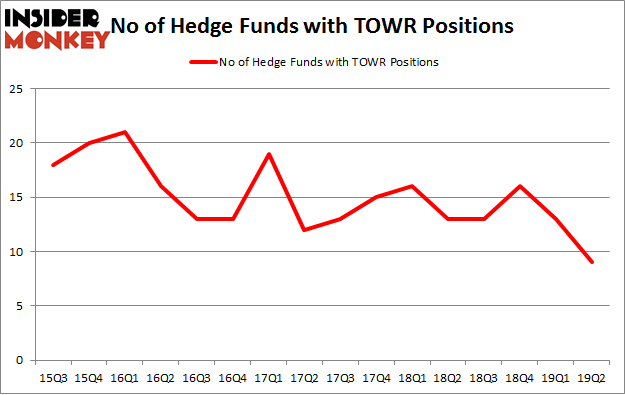 Among these funds, Royce & Associates held the most valuable stake in Tower International Inc (NYSE:TOWR), which was worth $14.1 million at the end of the second quarter. On the second spot was Renaissance Technologies which amassed $5.8 million worth of shares. Moreover, D E Shaw, AQR Capital Management, and Arrowstreet Capital were also bullish on Tower International Inc (NYSE:TOWR), allocating a large percentage of their portfolios to this stock.

Since Tower International Inc (NYSE:TOWR) has experienced falling interest from the smart money, logic holds that there was a specific group of hedgies who sold off their full holdings by the end of the second quarter. Interestingly, Israel Englander’s Millennium Management dumped the biggest position of the “upper crust” of funds followed by Insider Monkey, comprising close to $4.8 million in stock. Noam Gottesman’s fund, GLG Partners, also sold off its stock, about $2.8 million worth. These bearish behaviors are intriguing to say the least, as aggregate hedge fund interest fell by 4 funds by the end of the second quarter.

As you can see these stocks had an average of 11.75 hedge funds with bullish positions and the average amount invested in these stocks was $70 million. That figure was $33 million in TOWR’s case. Brightcove Inc (NASDAQ:BCOV) is the most popular stock in this table. On the other hand Eloxx Pharmaceuticals, Inc. (NASDAQ:ELOX) is the least popular one with only 2 bullish hedge fund positions. Tower International Inc (NYSE:TOWR) is not the least popular stock in this group but hedge fund interest is still below average. Our calculations showed that top 20 most popular stocks among hedge funds returned 24.4% in 2019 through September 30th and outperformed the S&P 500 ETF (SPY) by 4 percentage points. A small number of hedge funds were also right about betting on TOWR as the stock returned 59% during the same time frame and outperformed the market by an even larger margin.