Did Hedge Funds Drop The Ball On TopBuild Corp (BLD) ?

With the fourth-quarter round of 13F filings behind us it is time to take a look at the stocks in which some of the best money managers in the world preferred to invest or sell heading into the first quarter. One of these stocks was TopBuild Corp (NYSE:BLD).

TopBuild Corp (NYSE:BLD) shareholders have witnessed a decrease in hedge fund interest in recent months. Our calculations also showed that BLD isn’t among the 30 most popular stocks among hedge funds.

What does the smart money think about TopBuild Corp (NYSE:BLD)? 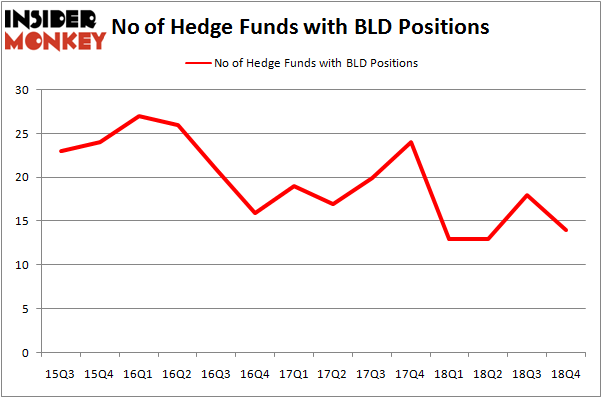 Among these funds, Adage Capital Management held the most valuable stake in TopBuild Corp (NYSE:BLD), which was worth $36 million at the end of the fourth quarter. On the second spot was Marshall Wace LLP which amassed $21.1 million worth of shares. Moreover, North Fourth Asset Management, Lodge Hill Capital, and Hawk Ridge Management were also bullish on TopBuild Corp (NYSE:BLD), allocating a large percentage of their portfolios to this stock.

Because TopBuild Corp (NYSE:BLD) has witnessed declining sentiment from hedge fund managers, logic holds that there were a few hedgies that elected to cut their entire stakes heading into Q3. At the top of the heap, Scott Phillips’s Latimer Light Capital cut the biggest stake of the “upper crust” of funds followed by Insider Monkey, worth close to $12.6 million in stock. Ken Griffin’s fund, Citadel Investment Group, also said goodbye to its stock, about $5.4 million worth. These transactions are important to note, as aggregate hedge fund interest fell by 4 funds heading into Q3.

As you can see these stocks had an average of 14 hedge funds with bullish positions and the average amount invested in these stocks was $66 million. That figure was $91 million in BLD’s case. HNI Corp (NYSE:HNI) is the most popular stock in this table. On the other hand Alexander’s, Inc. (NYSE:ALX) is the least popular one with only 6 bullish hedge fund positions. TopBuild Corp (NYSE:BLD) is not the least popular stock in this group but hedge fund interest is still below average. Our calculations showed that top 15 most popular stocks) among hedge funds returned 24.2% through April 22nd and outperformed the S&P 500 ETF (SPY) by more than 7 percentage points. A small number of hedge funds were also right about betting on BLD as the stock returned 55.7% and outperformed the market by an even larger margin.