How do you pick the next stock to invest in? One way would be to spend days of research browsing through thousands of publicly traded companies. However, an easier way is to look at the stocks that smart money investors are collectively bullish on. Hedge funds and other institutional investors usually invest large amounts of capital and have to conduct due diligence while choosing their next pick. They don’t always get it right, but, on average, their stock picks historically generated strong returns after adjusting for known risk factors. With this in mind, let’s take a look at the recent hedge fund activity surrounding Toll Brothers Inc (NYSE:TOL).

Toll Brothers Inc (NYSE:TOL) was in 20 hedge funds’ portfolios at the end of the second quarter of 2019. TOL investors should be aware of a decrease in hedge fund sentiment recently. There were 28 hedge funds in our database with TOL positions at the end of the previous quarter. Our calculations also showed that TOL isn’t among the 30 most popular stocks among hedge funds.

Unlike some fund managers who are betting on Dow reaching 40000 in a year, our long-short investment strategy doesn’t rely on bull markets to deliver double digit returns. We only rely on hedge fund buy/sell signals. Let’s review the fresh hedge fund action regarding Toll Brothers Inc (NYSE:TOL).

What does smart money think about Toll Brothers Inc (NYSE:TOL)?

Heading into the third quarter of 2019, a total of 20 of the hedge funds tracked by Insider Monkey were long this stock, a change of -29% from the previous quarter. On the other hand, there were a total of 19 hedge funds with a bullish position in TOL a year ago. With hedge funds’ positions undergoing their usual ebb and flow, there exists a select group of key hedge fund managers who were boosting their holdings significantly (or already accumulated large positions). 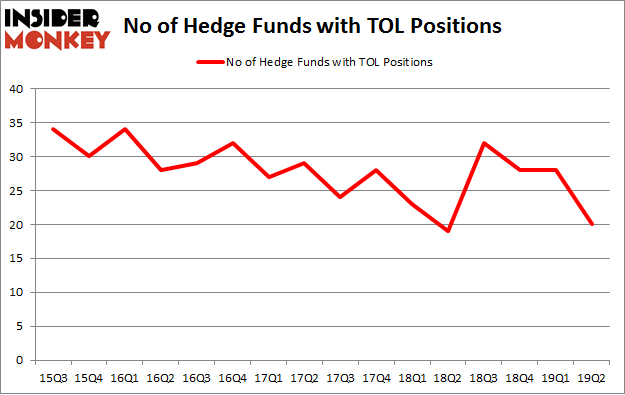 Of the funds tracked by Insider Monkey, Edgar Wachenheim’s Greenhaven Associates has the biggest position in Toll Brothers Inc (NYSE:TOL), worth close to $158.4 million, amounting to 2.8% of its total 13F portfolio. Sitting at the No. 2 spot is AQR Capital Management, led by Cliff Asness, holding a $73.5 million position; the fund has 0.1% of its 13F portfolio invested in the stock. Some other members of the smart money that hold long positions consist of D. E. Shaw’s D E Shaw, Paul Marshall and Ian Wace’s Marshall Wace LLP and Greg Poole’s Echo Street Capital Management.

Judging by the fact that Toll Brothers Inc (NYSE:TOL) has experienced bearish sentiment from the aggregate hedge fund industry, it’s easy to see that there lies a certain “tier” of hedge funds that elected to cut their entire stakes by the end of the second quarter. Interestingly, Renaissance Technologies said goodbye to the biggest position of the “upper crust” of funds watched by Insider Monkey, valued at an estimated $16.4 million in stock, and Ward Davis and Brian Agnew’s Caerus Global Investors was right behind this move, as the fund cut about $4.8 million worth. These bearish behaviors are intriguing to say the least, as aggregate hedge fund interest was cut by 8 funds by the end of the second quarter.

As you can see these stocks had an average of 25.75 hedge funds with bullish positions and the average amount invested in these stocks was $804 million. That figure was $369 million in TOL’s case. W.R. Grace & Co. (NYSE:GRA) is the most popular stock in this table. On the other hand Hudson Pacific Properties Inc (NYSE:HPP) is the least popular one with only 17 bullish hedge fund positions. Toll Brothers Inc (NYSE:TOL) is not the least popular stock in this group but hedge fund interest is still below average. Our calculations showed that top 20 most popular stocks (view the video below) among hedge funds returned 24.4% in 2019 through September 30th and outperformed the S&P 500 ETF (SPY) by 4 percentage points. A small number of hedge funds were also right about betting on TOL as the stock returned 12.4% during the same time frame and outperformed the market by an even larger margin.