Did Hedge Funds Drop The Ball On Tiffany & Co. (TIF) ?

Is Tiffany & Co. (NYSE:TIF) a buy, sell, or hold? Hedge funds are becoming less hopeful. The number of bullish hedge fund bets decreased by 13 lately. Our calculations also showed that TIF isn’t among the 30 most popular stocks among hedge funds. TIF was in 30 hedge funds’ portfolios at the end of December. There were 43 hedge funds in our database with TIF positions at the end of the previous quarter.

What does the smart money think about Tiffany & Co. (NYSE:TIF)?

Heading into the first quarter of 2019, a total of 30 of the hedge funds tracked by Insider Monkey were bullish on this stock, a change of -30% from the previous quarter. The graph below displays the number of hedge funds with bullish position in TIF over the last 14 quarters. So, let’s find out which hedge funds were among the top holders of the stock and which hedge funds were making big moves. 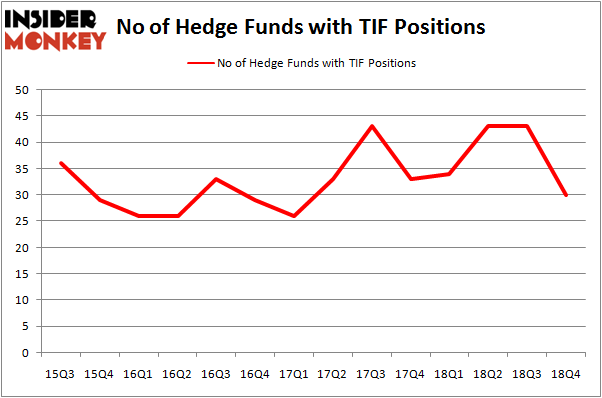 More specifically, Lone Pine Capital was the largest shareholder of Tiffany & Co. (NYSE:TIF), with a stake worth $545.5 million reported as of the end of September. Trailing Lone Pine Capital was JANA Partners, which amassed a stake valued at $152 million. Brahman Capital, Thunderbird Partners, and Manikay Partners were also very fond of the stock, giving the stock large weights in their portfolios.

Judging by the fact that Tiffany & Co. (NYSE:TIF) has faced declining sentiment from hedge fund managers, logic holds that there was a specific group of money managers that elected to cut their entire stakes heading into Q3. Interestingly, Phill Gross and Robert Atchinson’s Adage Capital Management said goodbye to the biggest stake of the 700 funds tracked by Insider Monkey, valued at close to $139.7 million in stock. Jacob Doft’s fund, Highline Capital Management, also cut its stock, about $134.8 million worth. These transactions are interesting, as total hedge fund interest fell by 13 funds heading into Q3.

Let’s go over hedge fund activity in other stocks – not necessarily in the same industry as Tiffany & Co. (NYSE:TIF) but similarly valued. We will take a look at Tapestry, Inc. (NYSE:TPR), Jack Henry & Associates, Inc. (NASDAQ:JKHY), Braskem SA (NYSE:BAK), and Kansas City Southern (NYSE:KSU). This group of stocks’ market caps are closest to TIF’s market cap.

As you can see these stocks had an average of 22 hedge funds with bullish positions and the average amount invested in these stocks was $365 million. That figure was $1226 million in TIF’s case. Tapestry, Inc. (NYSE:TPR) is the most popular stock in this table. On the other hand Braskem SA (NYSE:BAK) is the least popular one with only 9 bullish hedge fund positions. Tiffany & Co. (NYSE:TIF) is not the most popular stock in this group but hedge fund interest is still above average. This is a slightly positive signal but we’d rather spend our time researching stocks that hedge funds are piling on. Our calculations showed that top 15 most popular stocks among hedge funds returned 19.7% through March 15th and outperformed the S&P 500 ETF (SPY) by 6.6 percentage points. Hedge funds were also right about betting on TIF as the stock returned 19.9% and outperformed the market as well. You can see the entire list of these shrewd hedge funds here.