Did Hedge Funds Drop The Ball On The New York Times Company (NYT) ?

Before we spend countless hours researching a company, we’d like to analyze what insiders, hedge funds and billionaire investors think of the stock first. We would like to do so because our research has shown that the elite investors’ consensus returns have been exceptional. In the following paragraphs, we find out what the billionaire investors and hedge funds think of The New York Times Company (NYSE:NYT).

The New York Times Company (NYSE:NYT) was in 32 hedge funds’ portfolios at the end of the fourth quarter of 2018. NYT has experienced a decrease in activity from the world’s largest hedge funds lately. There were 34 hedge funds in our database with NYT holdings at the end of the previous quarter. Our calculations also showed that NYT isn’t among the 30 most popular stocks among hedge funds.

We’re going to take a gander at the latest hedge fund action regarding The New York Times Company (NYSE:NYT).

What does the smart money think about The New York Times Company (NYSE:NYT)?

At Q4’s end, a total of 32 of the hedge funds tracked by Insider Monkey were long this stock, a change of -6% from the previous quarter. On the other hand, there were a total of 20 hedge funds with a bullish position in NYT a year ago. With the smart money’s capital changing hands, there exists an “upper tier” of noteworthy hedge fund managers who were upping their stakes considerably (or already accumulated large positions). 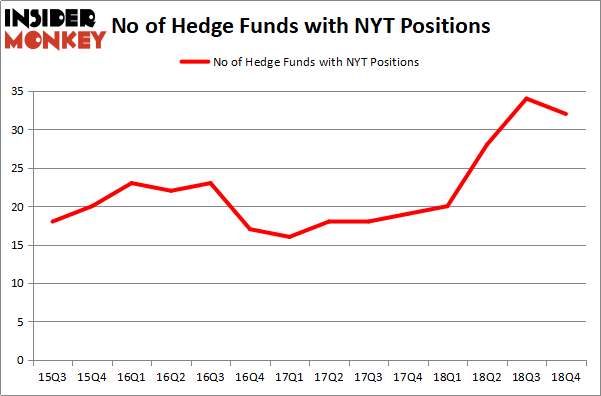 Since The New York Times Company (NYSE:NYT) has experienced a decline in interest from the entirety of the hedge funds we track, it’s easy to see that there were a few hedge funds who were dropping their positions entirely by the end of the third quarter. It’s worth mentioning that James H. Litinsky’s JHL Capital Group dumped the largest position of the “upper crust” of funds watched by Insider Monkey, valued at about $28.9 million in stock, and Bain Capital’s Brookside Capital was right behind this move, as the fund sold off about $21 million worth. These transactions are intriguing to say the least, as total hedge fund interest dropped by 2 funds by the end of the third quarter.

As you can see these stocks had an average of 19 hedge funds with bullish positions and the average amount invested in these stocks was $300 million. That figure was $821 million in NYT’s case. Alteryx, Inc. (NYSE:AYX) is the most popular stock in this table. On the other hand Shell Midstream Partners LP (NYSE:SHLX) is the least popular one with only 8 bullish hedge fund positions. Compared to these stocks The New York Times Company (NYSE:NYT) is more popular among hedge funds. Our calculations showed that top 15 most popular stocks) among hedge funds returned 24.2% through April 22nd and outperformed the S&P 500 ETF (SPY) by more than 7 percentage points. Hedge funds were also right about betting on NYT as the stock returned 48.3% and outperformed the market by an even larger margin. Hedge funds were clearly right about piling into this stock relative to other stocks with similar market capitalizations.