Tempur Sealy International Inc. (NYSE:TPX) was in 31 hedge funds’ portfolios at the end of December. TPX has seen an increase in enthusiasm from smart money lately. There were 30 hedge funds in our database with TPX holdings at the end of the previous quarter. Our calculations also showed that TPX isn’t among the 30 most popular stocks among hedge funds.

What does the smart money think about Tempur Sealy International Inc. (NYSE:TPX)? 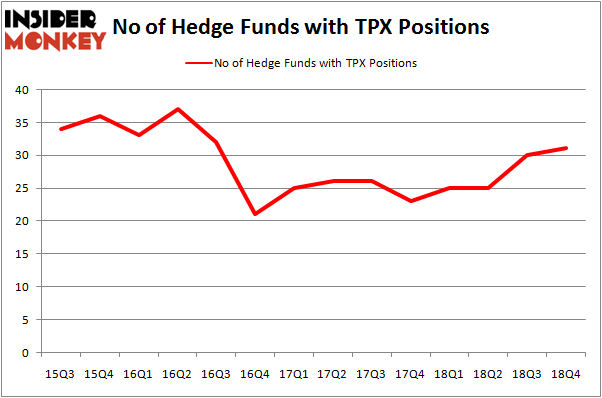 The largest stake in Tempur Sealy International Inc. (NYSE:TPX) was held by H Partners Management, which reported holding $331.2 million worth of stock at the end of December. It was followed by Route One Investment Company with a $210.8 million position. Other investors bullish on the company included PAR Capital Management, Centerbridge Partners, and Greenlight Capital.

As aggregate interest increased, some big names have been driving this bullishness. Centerbridge Partners, managed by Mark T. Gallogly, established the largest position in Tempur Sealy International Inc. (NYSE:TPX). Centerbridge Partners had $80.4 million invested in the company at the end of the quarter. Ryan Frick and Oliver Evans’s Dorsal Capital Management also made a $41.4 million investment in the stock during the quarter. The other funds with brand new TPX positions are Derek C. Schrier’s Indaba Capital Management, Lee Ainslie’s Maverick Capital, and John Ku’s Manor Road Capital Partners.

As you can see these stocks had an average of 29.75 hedge funds with bullish positions and the average amount invested in these stocks was $263 million. That figure was $1015 million in TPX’s case. Patterson-UTI Energy, Inc. (NASDAQ:PTEN) is the most popular stock in this table. On the other hand InterDigital, Inc. (NASDAQ:IDCC) is the least popular one with only 21 bullish hedge fund positions. Tempur Sealy International Inc. (NYSE:TPX) is not the most popular stock in this group but hedge fund interest is still above average. Our calculations showed that top 15 most popular stocks) among hedge funds returned 24.2% through April 22nd and outperformed the S&P 500 ETF (SPY) by more than 7 percentage points. Hedge funds were also right about betting on TPX as the stock returned 46% and outperformed the market by an even larger margin. Hedge funds were rewarded for their relative bullishness.