Teledyne Technologies Incorporated (NYSE:TDY) investors should be aware of a decrease in hedge fund sentiment in recent months. TDY was in 26 hedge funds’ portfolios at the end of June. There were 28 hedge funds in our database with TDY holdings at the end of the previous quarter. Our calculations also showed that TDY isn’t among the 30 most popular stocks among hedge funds (view the video below). 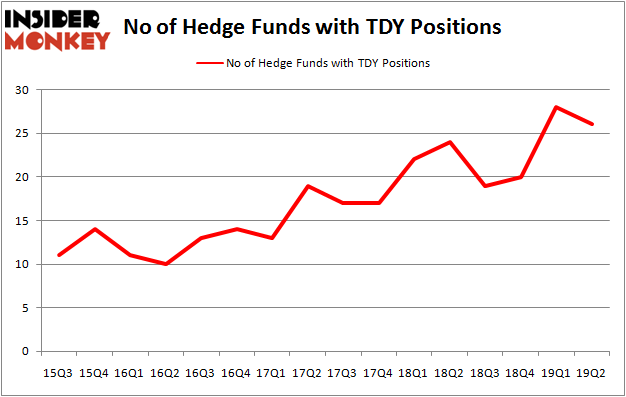 Unlike some fund managers who are betting on Dow reaching 40000 in a year, our long-short investment strategy doesn’t rely on bull markets to deliver double digit returns. We only rely on hedge fund buy/sell signals. Let’s go over the fresh hedge fund action encompassing Teledyne Technologies Incorporated (NYSE:TDY).

What have hedge funds been doing with Teledyne Technologies Incorporated (NYSE:TDY)?

Heading into the third quarter of 2019, a total of 26 of the hedge funds tracked by Insider Monkey were long this stock, a change of -7% from one quarter earlier. The graph below displays the number of hedge funds with bullish position in TDY over the last 16 quarters. With hedge funds’ positions undergoing their usual ebb and flow, there exists a few noteworthy hedge fund managers who were adding to their holdings meaningfully (or already accumulated large positions).

Judging by the fact that Teledyne Technologies Incorporated (NYSE:TDY) has witnessed bearish sentiment from hedge fund managers, it’s safe to say that there exists a select few fund managers that elected to cut their entire stakes by the end of the second quarter. Interestingly, Ken Grossman and Glen Schneider’s SG Capital Management dropped the largest investment of the “upper crust” of funds tracked by Insider Monkey, worth close to $19.4 million in stock. Andrew Feldstein and Stephen Siderow’s fund, Blue Mountain Capital, also dropped its stock, about $5.9 million worth. These moves are important to note, as total hedge fund interest was cut by 2 funds by the end of the second quarter.

As you can see these stocks had an average of 34 hedge funds with bullish positions and the average amount invested in these stocks was $1222 million. That figure was $643 million in TDY’s case. Zendesk Inc (NYSE:ZEN) is the most popular stock in this table. On the other hand Alleghany Corporation (NYSE:Y) is the least popular one with only 26 bullish hedge fund positions. Compared to these stocks Teledyne Technologies Incorporated (NYSE:TDY) is even less popular than Y. Hedge funds clearly dropped the ball on TDY as the stock delivered strong returns, though hedge funds’ consensus picks still generated respectable returns. Our calculations showed that top 20 most popular stocks among hedge funds returned 24.4% in 2019 through September 30th and outperformed the S&P 500 ETF (SPY) by 4 percentage points. A small number of hedge funds were also right about betting on TDY as the stock returned 17.6% during the third quarter and outperformed the market by an even larger margin.