Did Hedge Funds Drop The Ball On Synaptics Incorporated (SYNA) ?

Is Synaptics Incorporated (NASDAQ:SYNA) ready to rally soon? Money managers are taking a bearish view. The number of long hedge fund positions fell by 8 in recent months. Our calculations also showed that SYNA isn’t among the 30 most popular stocks among hedge funds (see the video below). 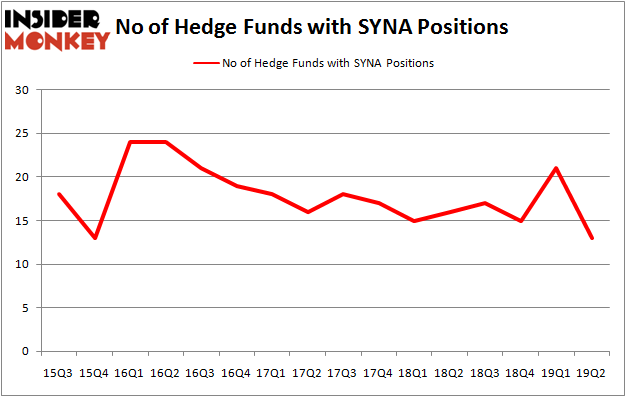 Unlike former hedge manager, Dr. Steve Sjuggerud, who is convinced Dow will soar past 40000, our long-short investment strategy doesn’t rely on bull markets to deliver double digit returns. We only rely on hedge fund buy/sell signals. We’re going to check out the fresh hedge fund action regarding Synaptics Incorporated (NASDAQ:SYNA).

What does smart money think about Synaptics Incorporated (NASDAQ:SYNA)?

At the end of the second quarter, a total of 13 of the hedge funds tracked by Insider Monkey were bullish on this stock, a change of -38% from the first quarter of 2019. Below, you can check out the change in hedge fund sentiment towards SYNA over the last 16 quarters. With hedge funds’ capital changing hands, there exists a few notable hedge fund managers who were upping their stakes substantially (or already accumulated large positions).

Of the funds tracked by Insider Monkey, Lynrock Lake, managed by Cynthia Paul, holds the number one position in Synaptics Incorporated (NASDAQ:SYNA). Lynrock Lake has a $88.2 million position in the stock, comprising 14.5% of its 13F portfolio. Coming in second is Fisher Asset Management, led by Ken Fisher, holding a $45.5 million position; the fund has 0.1% of its 13F portfolio invested in the stock. Some other professional money managers that hold long positions contain Clint Carlson’s Carlson Capital, John Overdeck and David Siegel’s Two Sigma Advisors and D. E. Shaw’s D E Shaw.

Since Synaptics Incorporated (NASDAQ:SYNA) has experienced declining sentiment from the smart money, it’s easy to see that there were a few fund managers who were dropping their entire stakes heading into Q3. Interestingly, George Soros’s Soros Fund Management dropped the biggest investment of all the hedgies tracked by Insider Monkey, valued at an estimated $4.4 million in stock, and Paul Hondros’s AlphaOne Capital Partners was right behind this move, as the fund dumped about $3.7 million worth. These transactions are interesting, as aggregate hedge fund interest was cut by 8 funds heading into Q3.

As you can see these stocks had an average of 14.5 hedge funds with bullish positions and the average amount invested in these stocks was $99 million. That figure was $179 million in SYNA’s case. Abercrombie & Fitch Co. (NYSE:ANF) is the most popular stock in this table. On the other hand Camping World Holdings, Inc. (NYSE:CWH) is the least popular one with only 9 bullish hedge fund positions. Synaptics Incorporated (NASDAQ:SYNA) is not the least popular stock in this group but hedge fund interest is still below average. Our calculations showed that top 20 most popular stocks among hedge funds returned 24.4% in 2019 through September 30th and outperformed the S&P 500 ETF (SPY) by 4 percentage points. A small number of hedge funds were also right about betting on SYNA as the stock returned 37.1% during the same time frame and outperformed the market by an even larger margin.