Did Hedge Funds Drop The Ball On Stericycle Inc (SRCL) ?

Stericycle Inc (NASDAQ:SRCL) was in 19 hedge funds’ portfolios at the end of December. SRCL investors should pay attention to a decrease in hedge fund sentiment recently. There were 20 hedge funds in our database with SRCL holdings at the end of the previous quarter. Our calculations also showed that srcl isn’t among the 30 most popular stocks among hedge funds.

What does the smart money think about Stericycle Inc (NASDAQ:SRCL)?

At the end of the fourth quarter, a total of 19 of the hedge funds tracked by Insider Monkey were bullish on this stock, a change of -5% from the previous quarter. Below, you can check out the change in hedge fund sentiment towards SRCL over the last 14 quarters. So, let’s examine which hedge funds were among the top holders of the stock and which hedge funds were making big moves. 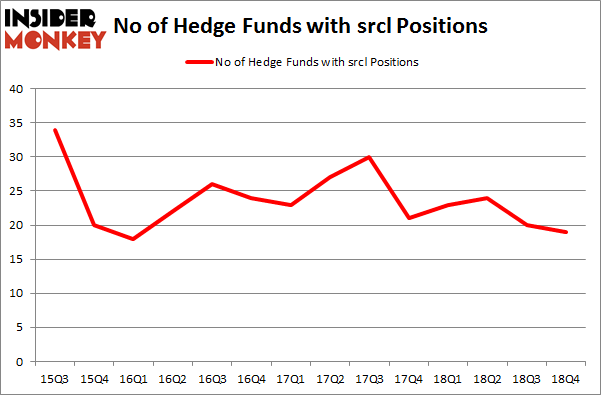 The largest stake in Stericycle Inc (NASDAQ:SRCL) was held by Ariel Investments, which reported holding $113.2 million worth of stock at the end of September. It was followed by Armistice Capital with a $31.5 million position. Other investors bullish on the company included Polar Capital, Diamond Hill Capital, and Markel Gayner Asset Management.

Since Stericycle Inc (NASDAQ:SRCL) has faced falling interest from the smart money, we can see that there lies a certain “tier” of fund managers that slashed their entire stakes heading into Q3. Intriguingly, Phill Gross and Robert Atchinson’s Adage Capital Management dumped the largest position of the 700 funds monitored by Insider Monkey, valued at close to $6.5 million in stock, and Ken Griffin’s Citadel Investment Group was right behind this move, as the fund said goodbye to about $4 million worth. These transactions are interesting, as total hedge fund interest dropped by 1 funds heading into Q3.

As you can see these stocks had an average of 17.25 hedge funds with bullish positions and the average amount invested in these stocks was $403 million. That figure was $274 million in SRCL’s case. Anaplan, Inc. (NYSE:PLAN) is the most popular stock in this table. On the other hand Copa Holdings, S.A. (NYSE:CPA) is the least popular one with only 15 bullish hedge fund positions. Stericycle Inc (NASDAQ:SRCL) is not the most popular stock in this group but hedge fund interest is still above average. Our calculations showed that top 15 most popular stocks) among hedge funds returned 24.2% through April 22nd and outperformed the S&P 500 ETF (SPY) by more than 7 percentage points. Hedge funds were also right about betting on SRCL as the stock returned 53.2% and outperformed the market by an even larger margin. Hedge funds were rewarded for their relative bullishness.