A whopping number of 13F filings filed with U.S. Securities and Exchange Commission has been processed by Insider Monkey so that individual investors can look at the overall hedge fund sentiment towards the stocks included in their watchlists. These freshly-submitted public filings disclose money managers’ equity positions as of the end of the three-month period that ended June 28, so let’s proceed with the discussion of the hedge fund sentiment on SITE Centers Corp. (NYSE:SITC).

Is SITE Centers Corp. (NYSE:SITC) worth your attention right now? The best stock pickers are becoming hopeful. The number of long hedge fund positions increased by 1 lately. Our calculations also showed that SITC isn’t among the 30 most popular stocks among hedge funds (view the video below). SITC was in 15 hedge funds’ portfolios at the end of June. There were 14 hedge funds in our database with SITC positions at the end of the previous quarter.

What does smart money think about SITE Centers Corp. (NYSE:SITC)?

Heading into the third quarter of 2019, a total of 15 of the hedge funds tracked by Insider Monkey held long positions in this stock, a change of 7% from the first quarter of 2019. By comparison, 15 hedge funds held shares or bullish call options in SITC a year ago. With hedgies’ sentiment swirling, there exists a few notable hedge fund managers who were increasing their holdings significantly (or already accumulated large positions). 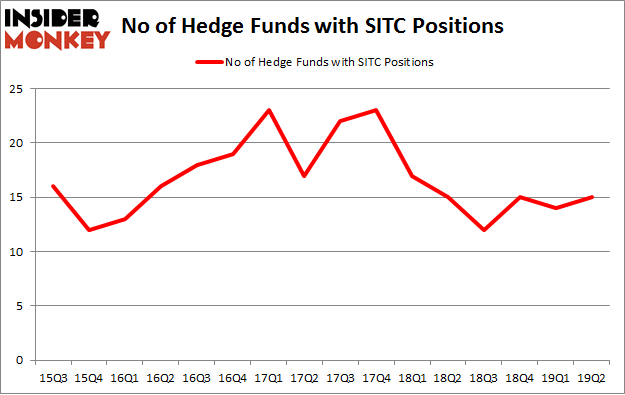 As industrywide interest jumped, key hedge funds have been driving this bullishness. Gillson Capital, managed by Daniel Johnson, assembled the biggest position in SITE Centers Corp. (NYSE:SITC). Gillson Capital had $3.7 million invested in the company at the end of the quarter. D. E. Shaw’s D E Shaw also initiated a $0.5 million position during the quarter. The other funds with new positions in the stock are Minhua Zhang’s Weld Capital Management and Steve Cohen’s Point72 Asset Management.

As you can see these stocks had an average of 10.5 hedge funds with bullish positions and the average amount invested in these stocks was $185 million. That figure was $53 million in SITC’s case. Seritage Growth Properties (NYSE:SRG) is the most popular stock in this table. On the other hand GSX Techedu Inc. (NYSE:GSX) is the least popular one with only 2 bullish hedge fund positions. SITE Centers Corp. (NYSE:SITC) is not the most popular stock in this group but hedge fund interest is still above average. Our calculations showed that top 20 most popular stocks among hedge funds returned 24.4% in 2019 through September 30th and outperformed the S&P 500 ETF (SPY) by 4 percentage points. Hedge funds were also right about betting on SITC as the stock returned 14.1% during the third quarter and outperformed the market. Hedge funds were rewarded for their relative bullishness.